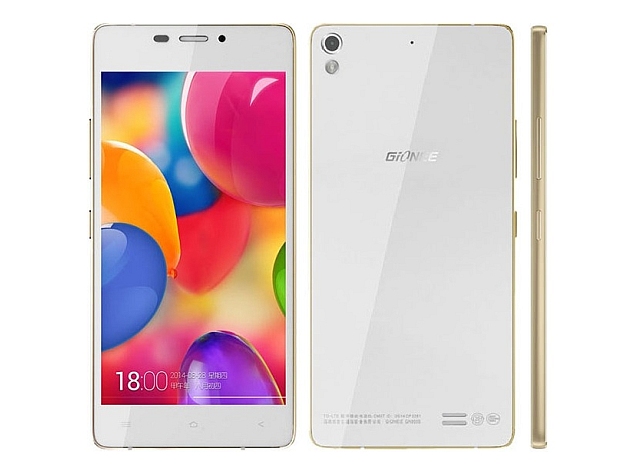 Gionee has launched what was for a while the 'world's slimmest smartphone', the Elife S5.1, in India. The 5.1mm-thick smarpthone has been priced at Rs. 18,999, and will go on sale in India from the first week of December.

The Elife S5.1 smartphone was launched in China at roughly $325 (Rs. 20,000 approximately) in September, and features 5.1mm shell comprising both glass and metal. The handset was also recognised by Guinness Book of World Records as the slimmest smartphone in the world in September. However, Oppo last month broke the record by launching its Oppo R5 handset flaunting 4.85mm thickness.

The Gionee Elife S5.1 runs Android 4.4.2 with Amigo 2.0 UI onboard. The handset has a 4.8-inch Super AMOLED display with a resolution of 720x1280 pixels (translating to a pixel density of 320ppi). It runs on 1.7GHz octa-core Mediatek 6592 processor, supported by 1GB of RAM. It features 16GB of non-expandable built-in storage.

Gionee's Elife S5.1 comes with an 8-megapixel rear camera with LED flash, and a 5-megapixel front-facing camera. The company is also touting LTE connectivity, but support for Indian LTE bands is not known. Other connectivity features included are Bluetooth 4.0, Micro-USB 2.0, Wi-Fi, GPS, and OTG connectivity. The 97 gram weighing handset is backed by a 2050mAh battery, and will be available in Black, White, Pink, and Mint Green colour variants.

The Chinese brand decided to launch its brand in India in the first quarter of 2013. It used to be an original device manufacturer (ODM) for many Indian brands earlier. The company had launched what it claimed to be the world's slimmest smartphone, the Elife S5.5, in March in India at Rs. 22,999. However, it only became available in May.