Gionee A1, A1 Plus to Launch on February 27 at MWC 2017; Images, Price, Specifications Leaked 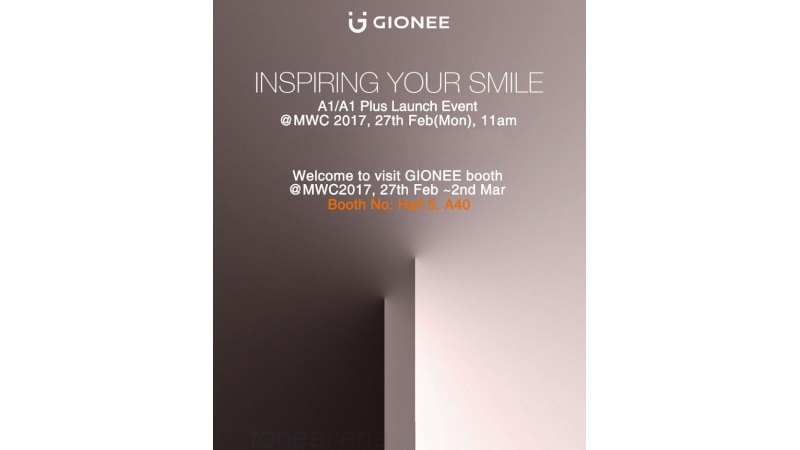 Gionee has started sending out invites for the launch of its A1 and A1 Plus smartphones and as per the invites, the new devices will be unveiled by the Chinese smartphone manufacturer on February 27 at MWC 2017. Separately, the Gionee A1 smartphone was leaked in live images alongside price and specifications.

In the meanwhile, the specifications of the Gionee A1 were leaked by a Nepali site alongside price and images. The smartphone is said to be priced at NPR 35,999 (roughly Rs. 22,500). It's said to run Android 7.0 Nougat, and sport a 5.5-inch full-HD (1080x1920 pixels) display with 2.5D Gorilla Glass. It will reportedly be powered by a 1.8GHz octa-core MediaTek processor that's coupled with 4GB of RAM.

Other rumoured specifications of the Gionee A1 include a 13-megapixel rear camera, a 16-megapixel front camera, as well as a fingerprint sensor on the rear panel, apart from a Home Button at the front. It's said to be powered by a 4010mAh battery with fast charging support. Connectivity options are said to include Infrared, while the smartphone is said to come with 64GB of inbuilt storage that's expandable via microSD card. The details regarding the Plus variant are thin at this moment but more information about both these smartphones will be revealed by the company at the launch event later this month.

LG G6 Will Use Snapdragon 821 SoC to Get Advantage Over Samsung Galaxy S8: Report
Uber, Ola Drivers' Strike in Delhi-NCR Called Off Partially