Get paid to watch ads with new Micromax MAd A94 smartphone 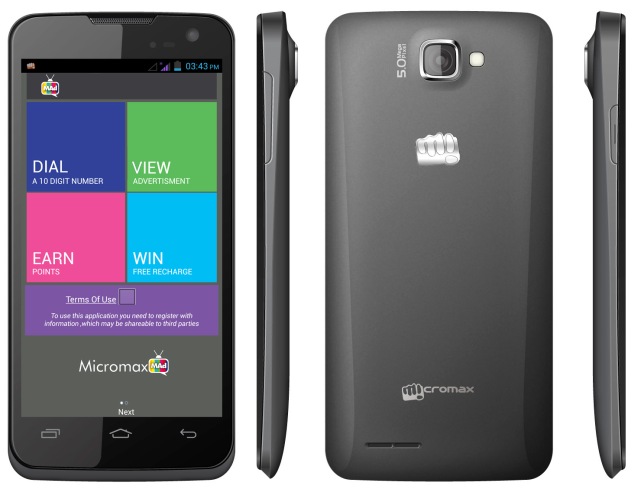 Micromax has concluded its recently conducted 'Mad About Ads' teaser campaign, with the launch of the Micromax Advertising Application (MAd), alongside the release of its first smartphone with the app preloaded on it, the Micromax MAd A94.

The MAd application will allow registered users on Micromax MAd A94 handsets to earn redeemable points by watching advertisements (once).  Points will be redeemed as balance credited as rupees to postpaid and prepaid accounts across GSM telecom operators in India. Micromax terms the whole process as a 'simple four step' one.

The move echoes one by Tata Teleservices, when it launched the 'get paid to watch ads' offer for its GSM and CDMA subscribers, in partnership with the similar GET app.

For now, the MAd and service app will only be available on the Micromax MAd A94, and Micromax is refusing to comment on whether it will be made available for other Micromax handsets, whether Android smartphones or feature-phones. The possibility remains distinct however, with the GET app demonstrating the same feature even for basic Java-enabled handsets.

Micromax has listed 3G (HSPA), Bluetooth v4.0, Micro-USB 3.0, GPS, 3.5 mm jack, and Wi-Fi connectivity options for the MAd A94, which also features 4GB of inbuilt-storage, with microSD expandability up to 32GB.

The MAd A94 packs a 5-megapixel rear autofocus camera with flash, apart from a 5-megapixel autofocus front-facing camera. Other sensors onboard include G-sensor, proximity sensor, and light sensor. The smartphone gets its juice from a 1800mAh battery, rated to deliver up to 5 hours of talktime, and 150 hours of standby time.

Apart from the MAd app, other preloaded apps include the M!Live portal, BBM, Hike, Spuul, Kingsoft Office, and Opera Mini browser. More information about the MAd app can be found on the company's MAd portal.

Speaking on the launch of the MAd app and Micromax MAd A94 smartphone, Rahul Sharma, co-founder, Micromax said:

"With the launch of Micromax MAd, we aim to create a powerful medium to interact, engage, entertain and connect with the consumers by lending them our ears to voice their areas of interest, preferences and incentivizing it for them through reward.  This service would provide a high engagement communication channel for the brands to break away from the clutter. It is also going to prove to be a game changer for operator eco-systems who are looking at newer and innovative ways to help them improve their profitability from every user. This unique service would also prove to be very significant for mobile eco-systems by solving the problem of ARPU (Average revenue per user), and contributing to the overall profitability."

"Micromax Advertising Application, MAd, is our unique attempt to create a win-win for the Mobile Eco-system where our customer not only gets delighted with the device hardware, but also with the unique application that will be supported across all GSM telecom operators and works well for both prepaid & postpaid customers. The launch of the MAd would be supported a clutter breaking 360 degree marketing campaign across print, online and TV. We have already kick started the digital leg of the campaign with 'Guess the Ad Campaign' which has received an overwhelming response from the ad-crazy audiences across social media platforms. First of its kind, the campaign is truly a tribute to the advertising world appreciating some amazing advertisements by leading brands."