Galaxy Note 9 Now Getting Samsung One UI Beta, Here’s How to Get It

Samsung's One UI is the next big transition of the company's custom Android skin, with a big focus on ‘reachability.' This skin is based on Android 9 Pie and beta testing for the same has already begun for the Galaxy S9 and Galaxy S9+ users. The company has now officially added the Galaxy Note 9 to the roster too and apart from the US, Germany and India are two more countries that have been reportedly confirmed to be part of the this beta test.

A new report from SamMobile states that a new firmware called N960FXXU2ZRKQ is rolling out to the Galaxy Note 9 (provided you've signed up for the beta program), which features the November 2018 security patch and the brand new One UI that's based on Android 9 Pie.

If you're in India and you own a Galaxy Note 9 (Review), then download the Samsung Members app from the Play Store and you should see a banner which states registrations are open for the One UI beta program. You'll need to be signed in with a Samsung account to register yourself. Once done, simply head to the ‘System Updates' section in the Settings app and refresh it. You should immediately get an update around 1.5GB, which should start downloading automatically. 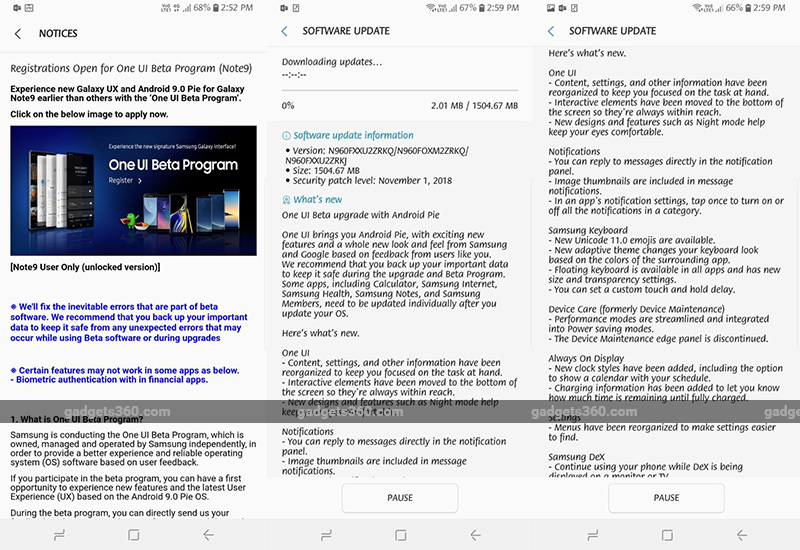 More
YouTube's Autoplay on Home Feature Coming to All Android, iOS Users
Google Search Results Are Personalised Even When Users Are Logged Out, DuckDuckGo Study Claims

Galaxy Note 9 Now Getting Samsung One UI Beta, Here’s How to Get It
Comment