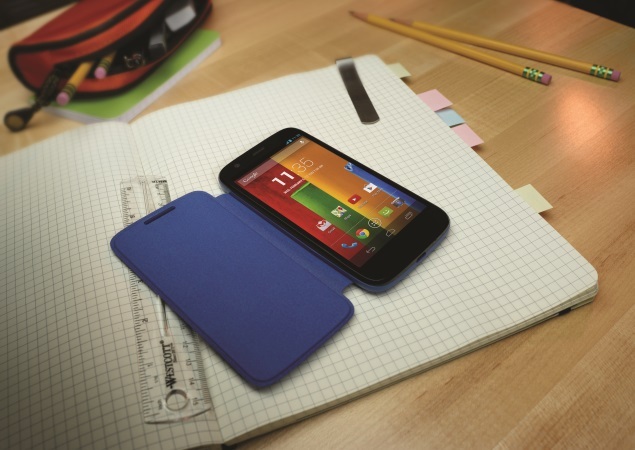 If you wish to exchange your existing phone for a Moto G, you might just be in luck.

Flipkart, the exclusive online partner of Motorola, has introduced new 'exchange your old phone' offer under which customers can get Rs. 2,000 discount on the purchase of the Moto G smartphone in exchange of select old phones. With the exchange offer, the Rs. 12,499 (8GB) and Rs. 13,999 (16GB) price tags on the Moto G get reduced to Rs. 10,499 and Rs. 11,999 respectively.

Some popular phones that can be used for the exchange offer for buying the Moto G includes the BlackBerry Curve 9320, Nokia Lumia 920, Nokia Lumia 520, Samsung Galaxy S III, Samsung Galaxy S4 mini, Sony Xperia Z1, Sony Xperia Z Ultra, Micromax Canvas 4, Micromax Canvas Doodle 2, HTC 8X, and HTC One S. The list also includes the Apple iPhone 5 and iPhone 4S. Consumers can check their old phone's eligibility on the Moto G listing on Flipkart. The online retailer also notes that consumers will be charged Rs. 50 for picking up the old phone, which would differ according to the location.

Flipkart has laid a few conditions for the 'exchange your old phone' offer for the Moto G. The old phone that you wish to exchange should be in a working condition.

Within few weeks after the successful launch of budget smartphone Moto G (Review) in the country, the former Google-owned company unveiled the Moto X, also exclusively available via Flipkart.