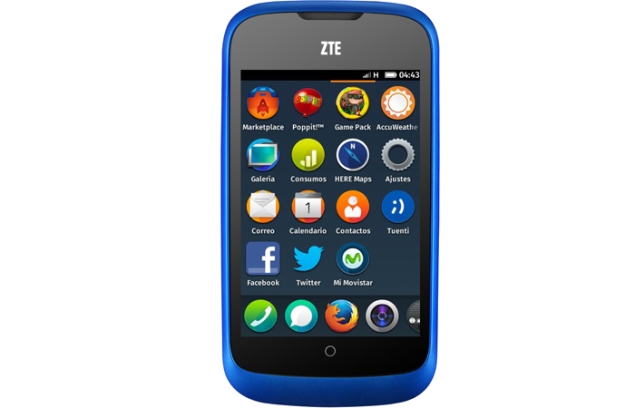 Spain's Telefonica is offering the world's first smartphone with the Firefox operating system to compete with devices running Google Android and Apple iOS.

The ZTE Open smartphone goes on sale in Spain this week for 69 euros (about $90) and will soon be available in several Latin American countries.

The device is aimed at the youth market and at people who are new to smartphones, Telefonica's chief of product development, Carlos Domingo, said during a Madrid press conference where he was joined by executives from Mozilla and telephone-maker ZTE.

Equipped with a 3.5-inch 320x480-pixel touchscreen, the ZTE Open includes a 3.2-megapixel camera, 256MB RAM and 512MB flash storage enhanced with a 4GB microSD card that comes as part of the package.

The ZTE Open is fully integrated with Facebook and the Spain-based social network Tuenti and talks are on about incorporating the WhatsApp instant-messaging service, Telefonica said.

Commenting on the launch, Luis Miguel Gilperez, CEO of Telefonica Espana, said, "We believe that smartphones need to be more open and that the web is the platform for making this possible. Consumers should not be locked to any one system but have the choice to consume the content they want and the flexibility to be able to take it with them when they change devices. This first open web device marks a significant milestone in making this possible. This is just the beginning as we plan to bring a wide range of Firefox OS devices to our customers."

The ZTE Open is the first of a number of Firefox OS devices that will be launched by Telefonica this year, offering the benefits of this new open operating system across a range of different price points. Other device manufacturers supporting Firefox OS include Alcatel OneTouch, LG, Huawei and Sony.

Mozilla executives said the ZTE Open is the "first chapter" in what they expect to be a long project, one that is already attracting interest from many other telecommunications companies.

With inputs from IANS
Comments