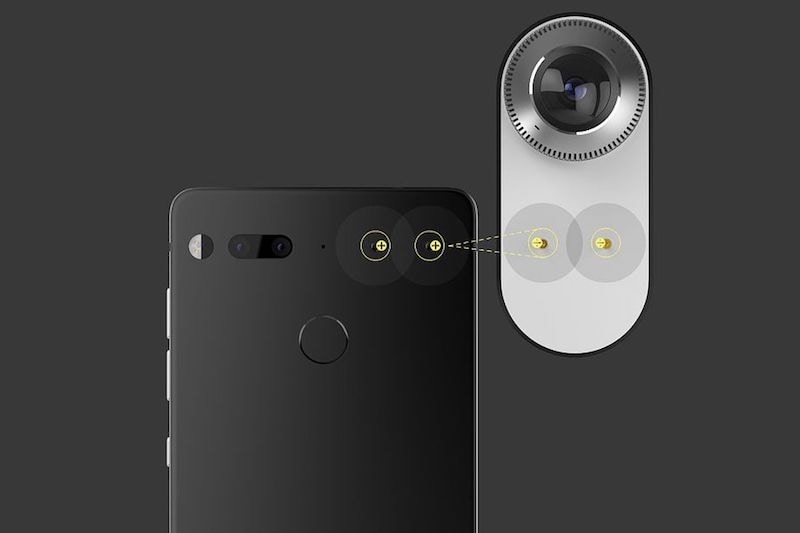 After months of teasing, Android creator Andy Rubin has finally unveiled the Essential Phone that features a near bezel-less display that tries to outdo Samsung's Galaxy S8. The other major highlight of the Essential Phone is its modular design that allows for additional accessories similar to the Moto Z. The first one unveiled being by the company is a 360-degree camera that for now is just being called the '360 camera', and can be hooked up to the back of the smartphone.

The rear of the Essential Phone is where most of the modular magic takes place. Next to the dual camera setup, you see accessory power pins that will power the camera once its clipped. The '360 camera' is an interesting accessory given how videos today are incorporating 360-degree cameras as seen on social media sites like Facebook. Essential's head of optics and imaging, Xiaoyu Miao, also believes that 360 "changes everything"

"If you look at a 360 camera, it's completely different from a conventional one, in that it captures the entire world around the user. It is an immersive experience that puts the viewer in the center of the action and fundamentally changes how we take a picture. You no longer aim your camera, because you get everything in every shot," Miao says in a blog post.

Essential's 360 camera, which weighs around 35 grams and is being called the world's smallest 360-degree personal camera by the company, includes a dual 12-megapixel fisheye sensors that can capture 4K 360 video at 30fps. The camera also features 4 microphones to capture sound in 3D.

The 360 camera can be bought along with the Essential Phone for an additional $50, or can be bought separately which will cost you $199. The company is only shipping the smartphone and accessory in the US with no word on when they will be made available outside. They can be ordered through the company's online store.

The 360 camera is just one of the magnetic accessories that has been revealed by the company as of now. Essential is likely to bring a few more Moto Mods-like modular accessories, including a possible audio accessories seeing as how the Essential Phone has dropped the 3.5mm headphone jack for a near port-less smartphone.

The Essential Phone features an edge-to-edge display with bezels mainly seen at the bottom of the phone. The smartphone features a titanium body with a ceramic back and a Gorilla Glass 5 on top. It sports a 5.71-inch QHD (1312x2560) display with an aspect ration of 19:10. The smartphone comes with top-of-the-line specs including Snapdragon 835 SoC, 4GB of RAM and 128GB of inbuilt storage.