DxOMark, the camera testing portal that is popular for publishing camera results of different flagship smartphones, has now started testing selfie cameras on phones. The DxOMark Selfie test protocol that is designed specifically for the front camera sensors takes more than 1,500 self-portraits and two hours of video to determine selfie results. The DxOMark team uses the same procedures and methodologies that it considers for testing the main camera performance of smartphones. However, there are important modifications "to reflect the way front cameras are used". The models that are currently leading on the selfie camera scale of DxOMark are the Google Pixel 3 and Samsung Galaxy Note 9 with overall scores of 92. These are early days yet however, with only 10 phones as yet tested.

DxOMark has kicked off its selfie camera testing protocol by picking up 10 phones. The list includes the Apple iPhone X, iPhone XS Max, Google Pixel 3, Huawei Mate 20 Pro, P20 Pro, Samsung Galaxy Note 9, Galaxy S8, and Xiaomi Mi Mix 3. However, the top spot is shared by the Pixel 3 and Galaxy Note 9 that both scored 92. The Mi Mix 3 and the iPhone XS Max, on the other hand, reached the third and fourth spots, respectively. 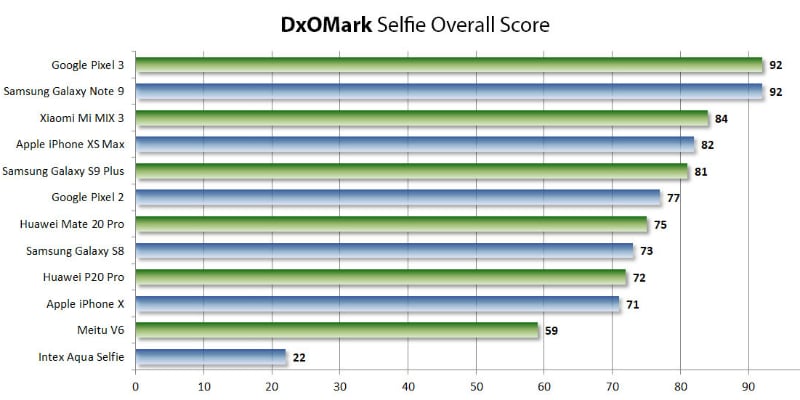 Interestingly, the DxOMark team has given an overall score of 81 to the Galaxy S9+, though the flagship shares the same hardware of the Galaxy Note 9. It seems that the handset was taken for the testing before the latest update that improved its selfie performance.

Elaborating the performance, DxOMark mentions in its blog post that the Pixel 3 has an edge over the Galaxy Note 9 in terms of focus system. The Galaxy Note 9 is said to have better results for exposure and colour, though. Selfies on the Pixel 3 are claimed to have slightly stronger contrast and a cooler white balance.

Distinctly, the Galaxy Note 9 is found to offer better exposing for faces alongside applying less contrast to faces to make selfies look slightly more natural than what on the Pixel 3. The Samsung model is also found to deliver good colour rendering and stabilisation on the part of selfie videos.