Dual-SIM Nokia phone leaked in images, may just be Asha 504 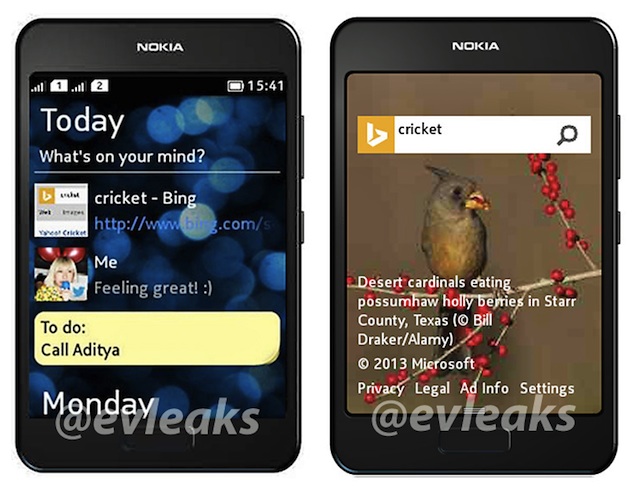 Nokia might be working on releasing a new dual-SIM phone, which just could be the Asha 504, if purported press renders leaked on Twitter are to be believed.

The picture of the rumoured dual-SIM Asha 504 were posted under the heading 'What Is This Thing? dual SIM edition' , showing a phone that is identical to another mystery Nokia Asha device leaked in November, also by @evleaks, alongside the rumoured Android-based Nokia Normandy.

The picture appears to be of a Nokia Asha device, however, the styling (apart from the seemingly small form factor) looks quite unlike the current generation of Asha devices, namely the Asha 500, Asha 501, Asha 502 and Asha 503. The bezel of the pictured phone is very different, along with the polished black finish, and the more rounded edges.

People also tweeted to the possibility of the leaked device showing a new Nokia tablet instead of Asha device. That does appear highly unlikely however, with the argument sounding feeble, where people said that the lack of an earpiece on the top pointed to it being a possible new tablet in the offering.

The leaked Asha phone's screen size is estimated to be anywhere between 3.2-inch to 3.5-inch. The press shots also show that Microsoft's Bing, is possibly the default search engine on the device.

With the Asha budget handsets forming a significant portion of the sales force for Nokia in emerging markets like South-East Asia, the rumoured new Asha 504 model, with dual SIM support to boot, may be something which would bolster the sales for the mobile maker
Comments