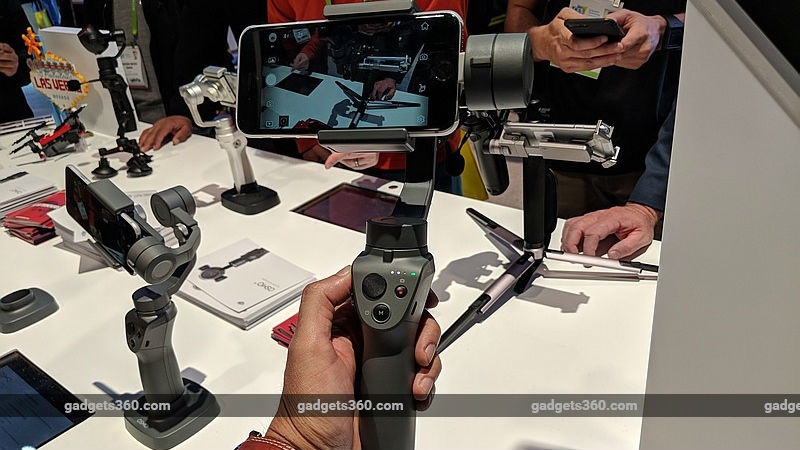 DJI Osmo Mobile 2, the company's next-generation camera stabiliser for smartphones, has been launched in India. The Chinese drone maker had unveiled the Osmo Mobile 2 alongside the Ronin-S at CES 2018. While the latter, which is DJI's first single-handed stabiliser for bigger devices like DSLRs and mirrorless cameras, has still not made its way into the country, the former is now available. The price tag attached with the Osmo Mobile 2 is Rs. 10,999. It is currently available via the Amazon India site, where it has a Rs. 1,000 discount, bringing its asking price to Rs. 9,999. To recall, the price of the device was set at $129 (roughly Rs. 8,800) during launch.

The Osmo Mobile 2 is the latest smartphone camera stabiliser in India from DJI. It comes with a new design and a more powerful inbuilt battery system. DJI claims to offer up to 15 hours of battery life on the Osmo Mobile 2, which is three times longer than that offered on the original Osmo Mobile. It is fuelled by a 2600mAh battery, compared to 980mAh battery present in the previous variant. Also, the battery can be used as an emergency power bank for smartphones that can be charged through the provided USB port. Via Amazon, SBI credit card customers also get 5 percent cashback on EMI.

In terms of dimensions, the Osmo Mobile 2 measures 295x113x72mm and has a weight of 485 grams. It is slightly lighter and significantly larger than the previous variant. It has a redesigned set of control buttons, and the two-way mobile clamp that allows users to shift between portrait and landscape modes.

Additionally, the DJI Osmo Mobile 2's gimbal features an inbuilt zoom slider for seamless zooming between the shots. There is a two-way mobile clamp that lets you easily pivot between landscape and portrait orientation.