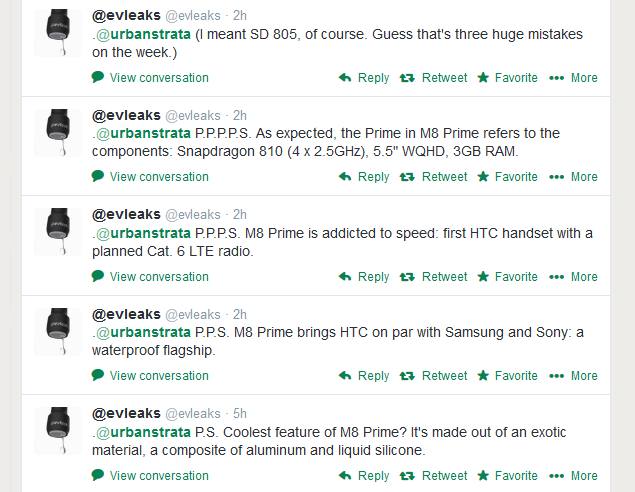 HTC fans can thank Jeff Gordon, HTC's Senior Global Online Communications Manager, because of whom some rumoured information on the alleged HTC One (M8) Prime smartphone has come to light.

@evleaks, the popular tipster, in a reply to Jeff Gordon's tweet speculated to be accusing him of inaccuracies (though he doesn't name the 'leaker'), listed a whole bunch of specifications of the alleged HTC One (M8) Prime smartphone, the anticipated premium variant of the HTC One (M8) flagship.

In the past few days, a well-known leaker has been completely wrong about at least two of his "leaks."Be careful where you get your news.

According to @evleaks, the alleged HTC One (M8) Prime will be built from a composite of aluminium and liquid silicone. The smartphone is also said to be waterproof, include a high speed Cat. 6 LTE radio, and a quad-core Snapdragon 805 SoC clocked at 2.5GHz. The tipster also mentions about the 5.5-inch QHD resolution screen and 3GB of RAM, which goes in line with what a report revealed earlier this month. It has been also noted that the storage capacity on the smartphone is said to be 16GB.

The firm last week announced its mini-variant of its flagship One (M8) smartphone, dubbed the One mini 2. The smartphone will be initially available in Europe, the Middle East and Africa (EMEA), and Asia starting from June, while no pricing details have been revealed.

The HTC One mini 2 will be available in the same three colour options as HTC One (M8) (Review | Pictures) - Amber Gold, Glacial Silver, and Gunmetal Gray. The smartphone however, drops the flagship's highlight feature: the duo rear camera setup and comes with a single rear camera.