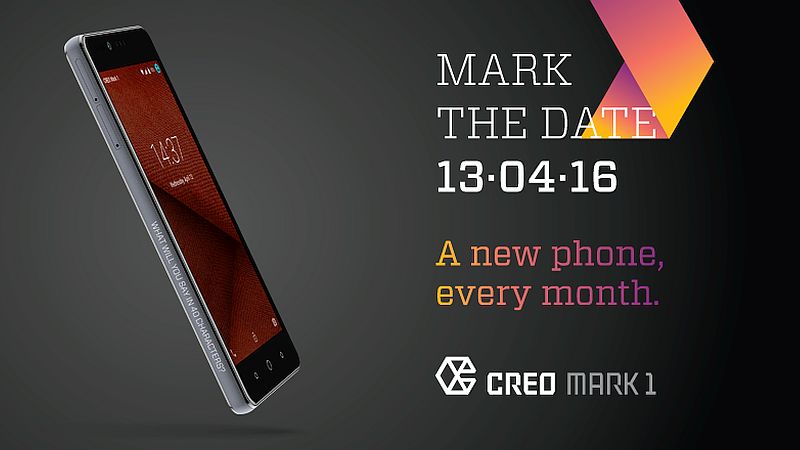 Creo revealed the Mark 1 smartphone earlier this month and promised that it will come with monthly feature updates. The company however until now had not revealed the exact launch date for the handset

The company on Wednesday confirmed that the Creo Mark 1 smartphone will be launched on April 13. Unfortunately, there are no details about the specifications of the handset as of now. A teaser video from Creo however had given a brief look at the handset and it looked to sport a contemporary look with a curved metallic rim and slim glass back, and was about the size of an iPhone 6 Plus.

The company has also started a new promotion of custom engravings, letting consumers choose text to have engraved on the side of the smartphone. Interested consumers can see how their engravings will look by visiting the company's site.

Sai Srinivas, Co-Founder and CEO, had told Gadgets360, "We at Creo put users at the centre of our monthly update model. These updates will bring powerful OS level features which are not present on Android currently."

"These feature updates will be based on suggestions and feedback that we get from our community. It's a first of its kind, truly community-inclusive update system. We'll collate all feature requests from our users and plan out releases basis feasibility, while ensuring that one breakthrough feature is released every month." he had added.

Rather than compete on specifications or price, it looked like the startup was looking to differentiate itself through OS updates that would keep users phone running like new, with a new feature released each month.

The Creo Mark 1 smartphone will launch sometime early this year on its proprietary OS, based on Android Lollipop 5.1.1, and will strive to give its users features found in the latest of Android, Srinivas said.

Gujarat Passes Bill to Impose Tax on E-Commerce Transactions
US Pentagon Says No Plans for Killer Military Robots, Yet