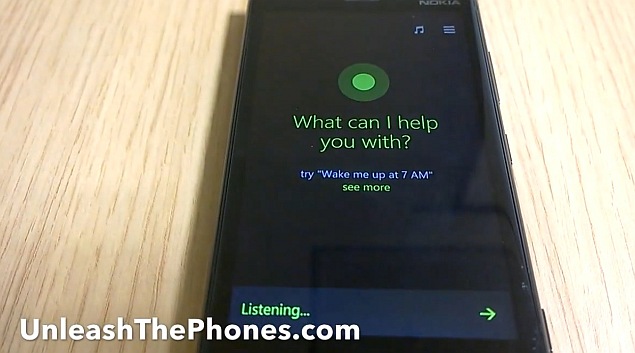 Cortana, Microsoft's anticipated answer to Apple's Siri voice-assistant feature, has edged away from its 'rumoured' status, appearing in a two-minute-long alleged walkthrough video, with an interface visibly similar to images leaked on Monday.

The purported Cortana walkthrough video, released by Unleash The Phones, shows the voice-assistant app pinned on the main app window on a Nokia handset. The app, once activated, greets the user by stating "Hi there. I'm Cortana" along with its circular animation at the centre of the screen and is then followed by "I can help make life a bit easier for you."

The leaked initial permission page for Cortana is seen asking for the user's approval to collect data related to location, contacts, voice input, emails, text, browser history, search history, calendar details and others. The video also indicates the app also helps users with reminders, suggestions, tasks "and lot more", and users will have to sign in via their Microsoft accounts.

As seen in Cortana's settings page in the previous leaked image, the video confirms the app's ability to call users by their chosen name.

- What are a couple of the most enjoyable parts of your everyday evenings? Pick two

- When you think about food, what's most important to you these days? Pick two

- What are two of your main motivations for going out to an event or activity?

- When you want to catch up on what's going on in the world, which section do you go to first?

Based on the answers to those questions, the leaked walkthrough video shows Cortana suggesting some content on the main app screen, which features "What can I help you with?" prominently. The app is also seen to include a search bar at the bottom of the screen, along with a microphone icon that activates the Cortana voice capturing functionality, waiting for the user to give commands.

The alleged Cortana walkthrough video can be seen below:

The alleged walkthrough video further details the 'Quiet hours' section under the 'Settings' app for Windows Phone OS 8.1, which can be activated or scheduled to make Cortana handle the user's calls and texts, apart from silencing other notifications.

The Cortana voice-assistant feature is expected to be integrated into Windows Phone 8.1, and unveiled at Microsoft's upcoming Build conference in April.