ColorOS 7 has made its way to India

ColorOS 7 has been officially launched in India as the new custom skin by Oppo. The latest ColorOS version, which was initially unveiled in China last week, is based on the company's Infinite Design concept that is aimed to simplify the user interface. The ColorOS 7 update brings the system-wide Dark Mode and is designed to support all the core Android 10 features. The interface also has full icon customisation as well as includes weather-adaptive alarm notifications, Artist Wallpaper Project, and sounds by Denmark's audio design company Epic Sound. With ColorOS 7, Oppo is trying to compete strongly against Xiaomi's MIUI 11 that was launched in India last month. Alongside reaching Oppo phones, the ColorOS 7 with some customisations will debut on a list of Realme phones.

Oppo is set to bring the ColorOS 7 update across over 20 phone models, including the Oppo Reno, Oppo Reno 10, Oppo Reno 10x Zoom, and Oppo Reno 2 as well as the Oppo Find, Oppo F, Oppo K, and Oppo A series. The update will reach users through a trial version starting today. Moreover, the update is planned to reach all the compatible models in the regions of China, South Asia, Southeast Asia, Europe, Asia-Pacific, and the Middle East.

Alongside the Oppo phones, the ColorOS 7 update will start reaching Realme phones. The beta programme for the new ColorOS update on the Realme X2 Pro will begin starting Wednesday, November 27, as Realme announced through a press release on Monday.

ColorOS 7 is based on Oppo's Infinite Design concept and includes a lightweight visual interface. It is touted to be the "largest update for ColorOS." Oppo has offered privacy-focussed features such as the Personal Information Protection option that lets users protect their personal information from third-party apps. There are also Payment Protection and File Protection options as the two major additions in the privacy settings. Further, the new ColorOS version brings a Private Safe to transfer photos, videos, audio, and other documents to a "secure zone" in the storage folder. This helps to block access to important content by other apps. 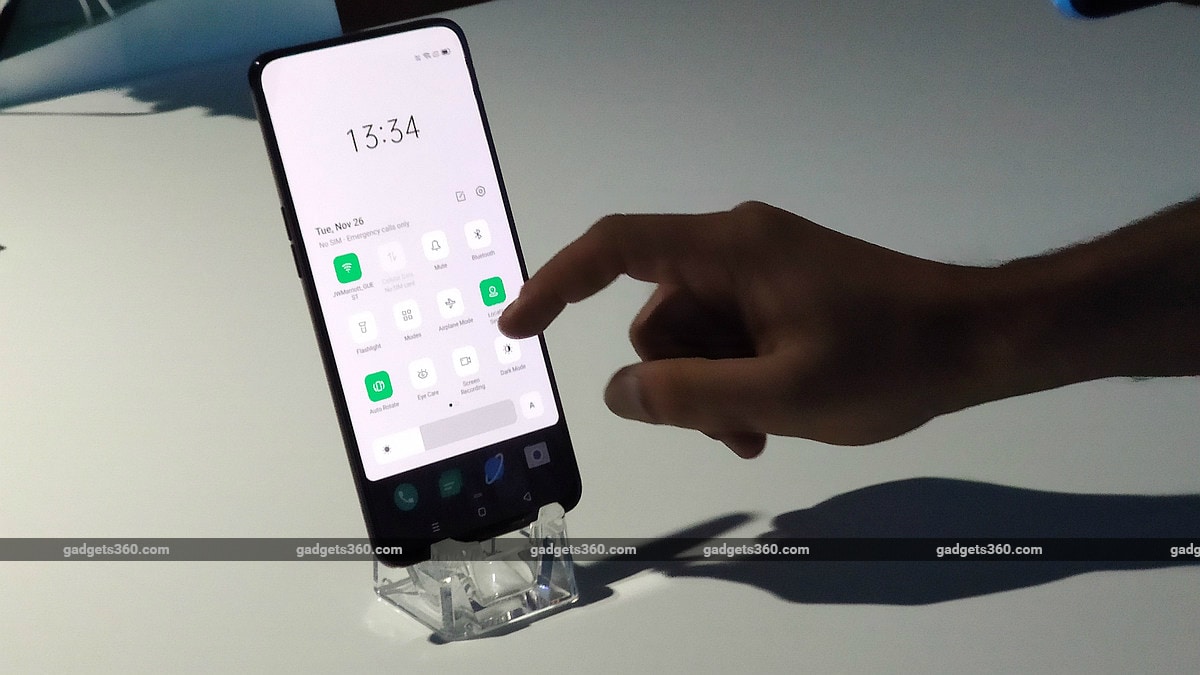 Apart from the features that are projected to restrict your personal information, ColorOS 7 has a Smart Sidebar that gives a place to hold your favourite apps and tools at the side of the screen. The new ColorOS also comes preloaded with a new Soloop video editing app. For Indian users, the update includes features such as Smart Riding and Riding Mode.

Oppo has also provided a localised feature called DocVault that integrates the government's DigiLocker service into ColorOS 7 to let you conveniently store your official documents. Additionally, there are live wallpapers dedicated to Indian monuments.

Localisation on ColorOS 7 has been performed majorly by Oppo's R&D centre in Hyderabad that has a team of more than 280 members with a focus on localising localised features and assisting the global ColorOS team in creating globalised features.

ColorOS 7 also brings CachePreload that is touted to make apps open and start faster than the previous custom skin version. Further, there is oMem that adapts to user habits to shift and allocate system resources accordingly. The proprietary feature is claimed to boost RAM utilisation by 40 percent and increase system response by 30 percent. The new ColorOS version also has oSense as a new scheduling mechanism that gives priority to front-end and user related threads.

As per the data shared by Oppo at the ColorOS 7 launch event in New Delhi, ColorOS has over 300 million users globally, reaching more than 140 countries and regions in over 80 languages. There are six research centres where it conceptualises and designs new ColorOS updates. Oppo also considers India as one of its most important markets.

Further reading: ColorOS 7 rollout, ColorOS 7 features, ColorOS 7, ColorOS, Oppo, Realme
Jagmeet Singh Email Jagmeet Jagmeet Singh writes about consumer technology for Gadgets 360, out of New Delhi. Jagmeet is a senior reporter for Gadgets 360, and has frequently written about apps, computer security, Internet services, and telecom developments. Jagmeet is available on Twitter at @JagmeetS13 or Email at jagmeets@ndtv.com. Please send in your leads and tips. More
Tesla Cybertruck Windows Would Have Been Unbreakable if Not for the Sledgehammer: Elon Musk
UIDAI Launches More Secure mAadhaar App for Android, iOS