Coolpad, a Chinese smartphone brand, has sent invites for an event scheduled on Thursday where it is expected to launch its first smartphone in India. As of now, details about Coolpad smartphone, which will be launched under the Dazen brand, including specifications or pricing are unknown.

The India launch invite doesn't tip much about the smartphone and only shows the app icons for the dialler, message, contacts, and camera alongside dual-SIM support functionality on the handset. 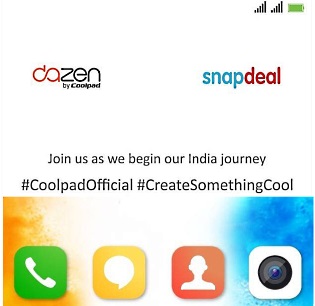 The company at the beginning of May had announced it would be entering the Indian market with a Xiaomi-like online-only sales model. Chinese smartphone manufacturer has already announced its exclusive partnership with online marketplace Snapdeal. The company also appointed former Flipkart executive Varun Sharma as the India CEO as well as confirmed to set up R&D centre alongside a manufacturing plant in the country as part of the 'Make in India' campaign soon.

The company earlier this month also announced it will be bringing its 'patented frameless smartphone' in India within the year, stressing on the design's visual experience as well as functionality.

Some other popular Chinese brands that already exist in the Indian market include Huawei, Oppo, OnePlus, Xiaomi, ZTE (alongside the recent entry of its Nubia brand), and Meizu. It will be interesting to see how Coolpad Dazen establishes itself in the Indian market despite so much competition.

Meizu, another Chinese handset manufacturer, launched its m1 note smartphone this month, priced at Rs. 11,999. The company alongside also confirmed that Meizu m1 note will be available exclusively via Amazon India. Unlike Xiaomi or Huawei's Honor brand that have used flash sale models for selling handsets, Meizu decided to stick with normal sale model for its m1 note smartphone in India.