It's worth pointing out that Flurry's definition of smart devices includes mobiles and tablets running iOS and Android. Other operating systems like Windows Phone and BlackBerry are not included as part of this data. Flurry estimates that it reliably measures activity across more than 90% of the world's smart devices.

The milestone comes nearly a year after China overtook US in terms of monthly iOS and Android activations.

With both US and China near equal in January 2013 Flurry data at 222 million and 221 million devices respectively, Flurry projects that since China is growing at a much faster rate than US, it will become the top country in terms of active smart devices by end of this month. As per its projections, China will have 246 million devices compared to 230 million in the United States. 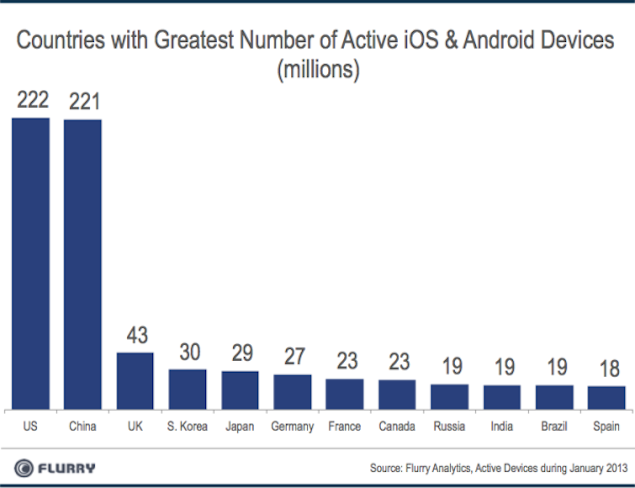 Flurry further states that China is unlikely to give up this lead in a hurry, and will stay the top country for years to come, thanks to its large population base.

We also conclude that the U.S. will not take back the lead from China, given the vast difference in population per country. China has over 1.3 billion people while the U.S. has just over 310 million. Considering that the U.S. has the world's 3rd largest population, the only other country that could feasibly overtake China sometime in the future is India, with a population of just over 1.2 billion. However, with only 19 million active smart devices in India, China will not likely see competition from India for many years.  Below, we show the top 12 countries by active iOS and Android installed base through the end of January 2013.

Flurry also shared data about fastest growing markets in terms of smart device installed base over the last year. As expected, the list is dominated by developing countries, with Cambodia taking the top spot with 278% growth. China came in sixth with 209% growth, while India came in at 8th spot with an increase in total number Android + iOS devices of 189%. 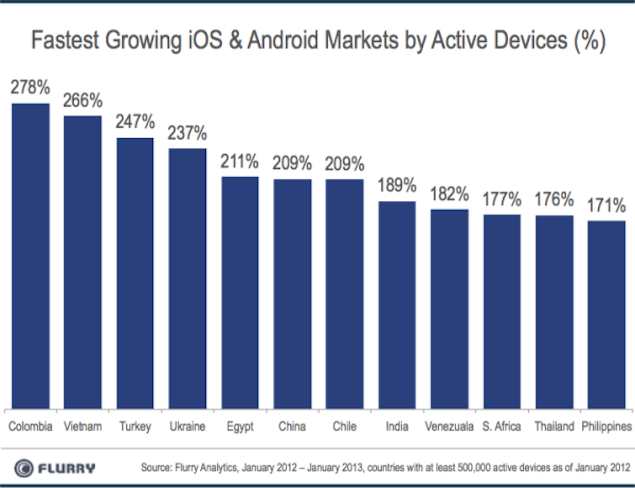