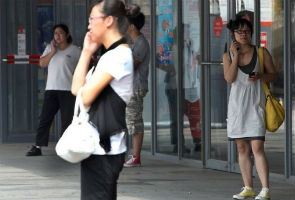 Highlights
China is heading towards the billion-mark in the number of mobile-phone users with a rapidly rising number of people in the country relying on these phones as their primary medium of communication.

The total number of individuals using cell phones has gone beyond 929 million in a country having a population of 1.34 billion.

According to statistics released by the Ministry of Industry and Information Technology (MIIT), more Chinese citizens are relying on their mobile phones as their primary method of communication, Xinhua reported.

China's mobile phone operators added 70.83 million new subscribers in the first seven months of this year, MIIT said in a statement on its website, adding this brought the country's total number of cell phone users to 929.84 million.

The total number of third-generation (3G) mobile phone service subscribers expanded to 87.2 million by the end of July, according to MIIT.