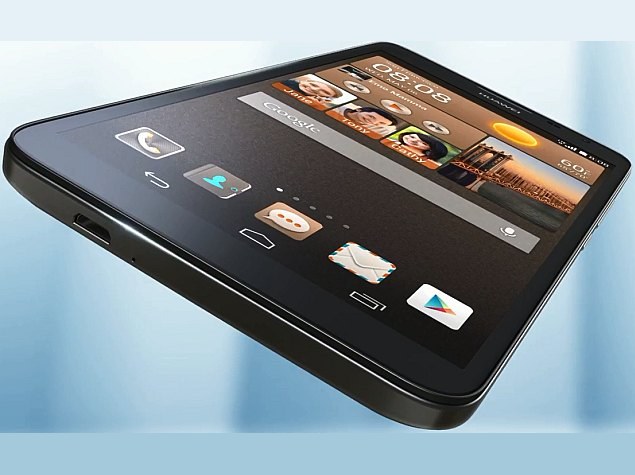 Huawei on Monday launched the refreshed version of the Ascend Mate phablet at CES 2014, called the Ascend Mate 2 4G, bearing the same 6.1-inch HD IPS+ LCD display, but with an upgraded chipset, more built in storage, and bigger front and rear cameras.

Huawei unfortunately did not provide availability and pricing details of the Android 4.3 Jelly Bean-based phablet, except to mention that the Ascend Mate 2 will unlike its predecessor be available in the US, apart from 40 other markets.

The Huawei Ascend Mate 2 4G features a 1.6GHz quad-core Snapdragon 400 processor (MSM8928), along with an Adreno 306 GPU and 2GB of RAM. It runs Huawei's Emotion UI 2.0 skinned on top of Android. It features a 13-megapixel autofocus HDR-capable f/2.0 rear camera, and a 5-megapixel f/2.4 front-facing camera. The Ascend Mate 2 comes with 16GB of inbuilt storage, as opposed to 8GB from its predecessor.

Huawei has also upgraded the Ascend Mate's radio, hence the 4G moniker, with LTE-support up to 150 Mbps download, and 50 Mbps upload. The Ascend Mate 2 4G is also slightly thinner (but also heavier) than its predecessor, at 9.5mm and 202 grams. The company is also touting a two day battery life, though it sports the same 4050 mAh battery. Notably, a 'reverse' charging feature has also been included, allowing the phone to be used to charge other devices.

Huawei Consumer chief executive Richard Yu unveiled the Ascend Mate 2 at the show, and also added the phablet has an upgraded front-facing camera for "selfies," and a new "intuitive" interface that simplifies the Android operating system.

Yu also announced that the Chinese telecom giant aims to sell 80 million smartphones in 2014, as it boosts its brand name worldwide and makes a new push for US consumers. Huawei is battling for the number three spot in global smartphone sales, but has only a limited presence in the United States.

Huawei, which has faced criticism in the United States over the extent of its ties to the Chinese government and military, is seeking to boost its brand presence among consumers, moving away from manufacturing for other labels.

"We want to be a great consumer brand in the world," Yu said.

(With inputs from AFP)