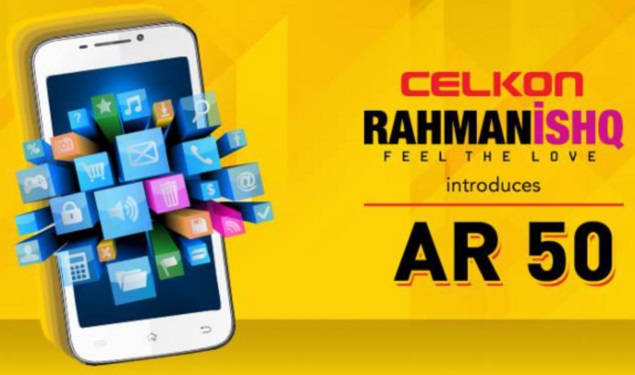 Celkon Mobiles has launched its second AR Rahman-themed smartphone, the AR50 for Rs. 8,499, under the RahmanIshq series. The company has announced that the AR50 will be available by end of this month. Much like the RahmanIshq AR45, the Celkon RahmanIshq AR50 is also being promoted as a music smartphone by the company and is targeted at music lovers.

The Celkon RahmanIshq AR50 comes with 5-inch display (unspecified resolution) and is powered by a dual-core 1.2GHz Cortex A7 processor. The AR50 runs Android 4.2.2 Jelly Bean out of the box and supports dual-SIM with dual standby. The smartphones comes with 512MB of RAM and includes 4GB of inbuilt storage, further expandable up to 32GB with microSD card. It sports 5-megapixel rear autofocus camera and also houses a VGA front-facing camera. Connectivity features on the device include Wi-Fi, Bluetooth, GPS/ AGPS and 3G. The company has not revealed details about AR50's battery, talktime and standby time. The Celkon RahmanIshq AR50 much like the AR45 features special ringtones composed by music director AR Rahman.

Commenting on the launch R. Mahendran, President Sales, Celkon Mobiles said, "Celkon is ushering in the next era of smartphones with carefully crafted music smartphones to compliment the music loving audience. Celkon has crafted inspired designs that enable new user experiences and make music easily available to more customers than ever before."

Earlier this month, Celkon introduced the RahmanIshq AR45 which was the first smartphone under RahmanIshq series. It features 4.5-inch FWVGA (480x854 pixels) display and is powered by a 1.2GHz dual-core Cortex A7 MediaTek processor. The device runs Android 4.2.2 Jelly Bean and supports dual-SIM with dual standby.

Other specifications in the RahmanIshq AR45 include 5-megapixel autofocus rear camera with LED flash, VGA front-facing camera, 512MB of RAM, and 4GB of inbuilt storage which can be further expanded up to 32GB via microSD card. The device also includes a 2000mAh battery, though talktime and standby time figures have not been detailed by the company.

iPads, Macs, Mavericks: What (not) to expect from Apple's Tuesday media event
Gmail and other Google services get new unified login page