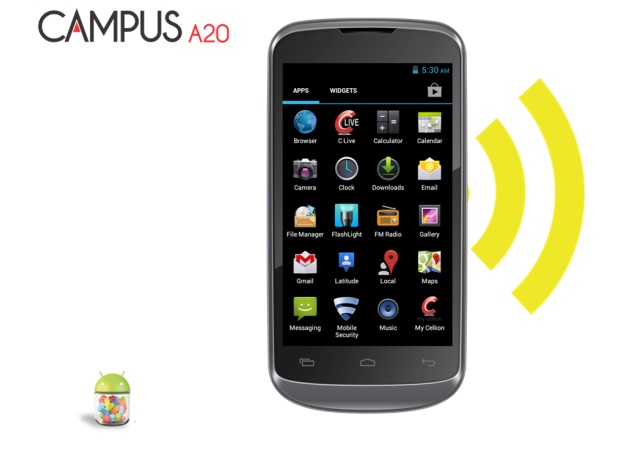 After launching the Celkon Signature One A107+ phablet recently, Celkon Mobiles has announced the launch of another budget smartphone, the Campus A20.

The Celkon Campus A20 features 4-inch WVGA display with 480x800 pixels resolution. It is powered by a 1.2GHz dual-core processor with 256MB RAM. The device runs on Android 4.2 Jelly Bean. The Celkon Campus A20 is a dual-SIM device with GSM+GSM support. There is a 3.2-megapixel rear camera and a VGA front-facing camera. It also includes 512MB internal storage that can be expandable up to 32GB via microSD card.

The device is backed by a 1500mAh battery. Connectivity options on the device include a 3.5mm audio jack, Bluetooth, 3G, GPRS, EDGE, Wi-Fi and Micro-USB. Celkon A20 is now available for a price of Rs. 5,299.

After forging a formidable reputation for itself in the feature phone segment, Celkon has now turned to the smartphone segment.

The company launched the Signature One A107+ for Rs. 7,299 last week. It sports a 5-inch display with 480x800 pixels resolution. The device runs on Android 4.2.2 Jelly Bean. It is powered by 1GHz dual-core processor and comes with 512MB RAM. There is an 8-megapixel rear camera at the back with LED flash and a 1.3-megapixel front-facing camera. The dual-SIM smartphone (GSM+GSM) also supports dual standby and comes with 4GB of internal storage capacity expandable up to 32GB via microSD card. Connectivity options on the phone include Bluetooth, Wi-Fi, 3.5mm audio jack, EDGE, GPRS and GPS. The phone comes with a 2100mAh battery.

Celkon Signature One A107+