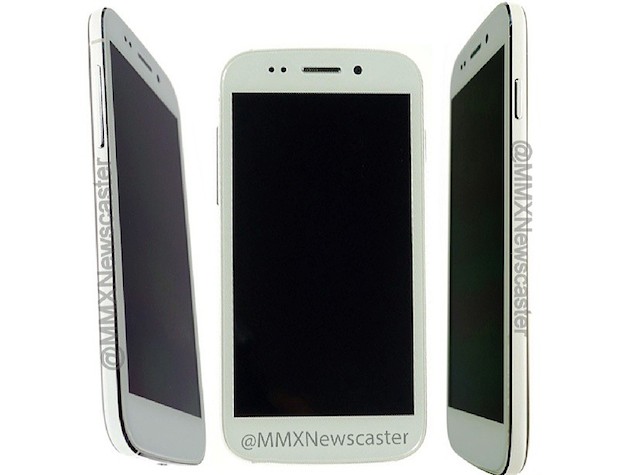 Micromax Canvas 4 is set to be officially unveiled next week, when pre-bookings for the smartphone open on June 28. Ahead of the launch, Twitter user @MMXNewscaster has shared an image that it claims is the Micromax Canvas 4 in White avatar.

While the leaked image reveals a phone that looks rather similar to Samsung's phones, there's one thing that stands out - the lack of a physical home button. Yes, if the leaked image is real, it looks like Canvas 4 will ship without a physical home button. That would indeed fit in nicely with the "What's next?" theme that Micromax teased on its Facebook page earlier this week.

Other than that it looks like a very familiar design, with the volume rocker on the left, and what should be the power button, on the right. A camera and two sensors/ noise cancelling mics can also be seen at the front.

The only thing we know for sure so far is the Micromax Canvas 4 will come with a 13-megapixel camera, since that bit is apparent in the teaser videos that Micromax posted last week. Pre-bookings open June 28, as mentioned earlier.

Another interesting bit that is official, is the "Can life be endless?" line that Micromax is using to tease the Canvas 4. The line obviously seems like a reference to the battery life, and one wonders if one of the highlights of the Canvas 4 will be a big battery.

Micromax will likely need that big battery, give the Canvas 4 is said to sport a full-HD display. We've seen two full-HD budget smartphones launched already in the Indian market, in the form of Wickedleak Wammy Passion Z and the Lemon A4. While the Wammy Passion Z costs Rs. 14,990, the recently launched Lemon A4 carries a price tag of Rs. 17,999.

Given the price of these phones, it is possible for Micromax's next flagship to have a full-HD display and still be priced in the sub-Rs. 20,000 segment, company's preferred playground. For people eagerly awaiting price and full specs of the Canvas 4, June 28 can't come soon enough.

Nvidia Shield Android-based gaming console gets a price cut ahead of launch
ICC Champions Trophy final live: 7 apps to catch the score on the move