While Amazon and Flipkart are celebrating their growth during the ongoing festive sales, a new report by Canalys has shown that the online smartphone market in India is set to surpass 15 million units shipments in the third quarter of this year, growing 25 percent year-on-year and accounting for 38 percent it the total smartphone market in the country. The Singapore-headquartered market research firm has estimated that online channels, including Flipkart, Amazon.in, Paytm Mall, and Mi.com, grabbed 35 percent of the total smartphone sales in the country in the second quarter. Online marketplaces such as Amazon.in and Flipkart already dominated the Indian online smartphone market, whereas shipments during the quarter directly via vendors' websites accounted for 9 percent of the total.

According to the Smartphone Analysis, October 2018 report by Canalys, smartphone sales through online channels in India have grown more than 65 percent year-over-year with 11.7 million units shipped in the second quarter. Flipkart, Amazon, and other retailers dominated the online channels in the second quarter with massive 91 percent share, while vendor websites such as Mi.com and OnePlus.com accounted for 9 percent of all online shipments during the quarter.

Canalys Analyst TuanAnh Nguyen notes that the Walmart-Flipkart deal and Alibaba's investment into Paytm have "infused much need optimism in the industry" and making smartphones as the direct beneficient of the fresh investments. "Online retail is seeing fresh vigor in India," Nguyen adds. 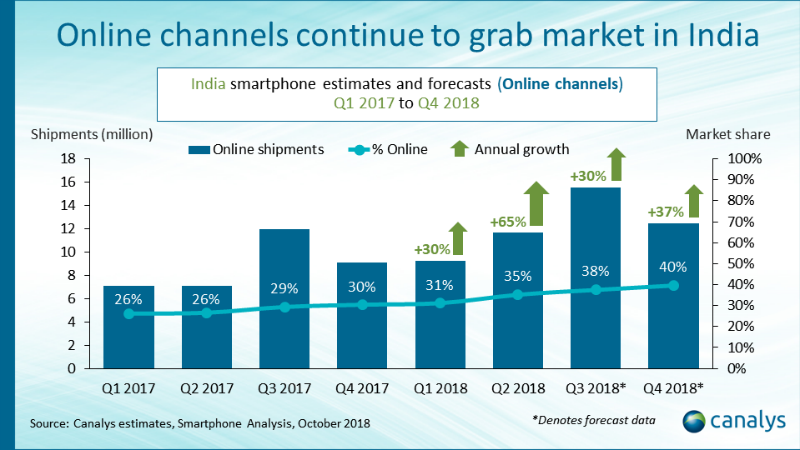 The traditional retail model in India is based on offline retail for a long time. However, smartphone vendors such as Xiaomi brought a change to the market. Canalys points out in its detailed analysis that as of the second quarter, 62 percent of smartphones were shipped to distributors in the country and eventually resold to lower-tier channel partners and retailers. Xiaomi has continued its domination on the online smartphone market with a 54 percent share, followed by Samsung at 13 percent and Huawei at 7 percent. The analyst firm also highlights Asus that was initially 100 percent distribution led, recently revamped its go-to-market strategy and set to move to 100 percent online-only in the coming months. The Taiwanese vendor already brought some offers during the ongoing Flipkart sale to persuade buyers. Moreover, the company is found to tripled its shipments sequentially from the first quarter to the second quarter.

Canalys also estimates that 64 percent of Xiaomi's total smartphone business in the second quarter was driven by the online market. This scenario is even higher in the case of Honor and OnePlus that had 91 percent and 92 percent of their business online during the quarter. 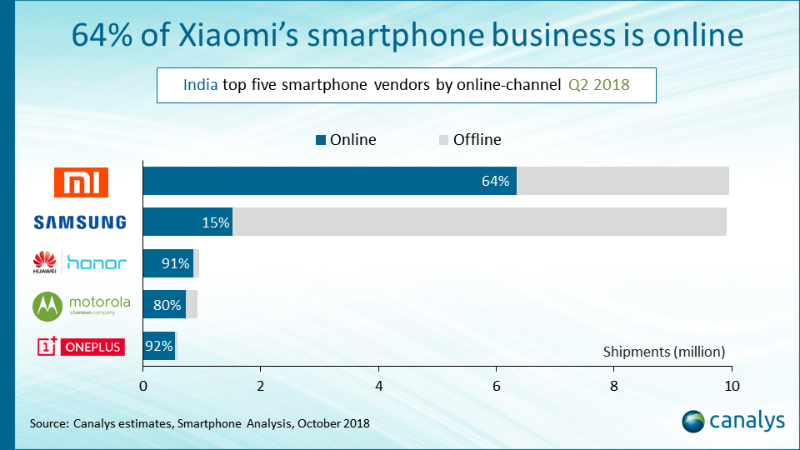 On the festive sales, Canalys notes that the aggressive offers by Amazon and Flipkart are likely to "stimulate demand". Young brands such as Poco and Realme are also expected to boost smartphone shipments in the next couple of quarters.

"There has been a marked shift in the go-to-market of various smartphone vendors in India and online retail is a big part of that change," said Canalys Research Manager Rushabh Doshi, in the report revealing the analysis. "While it's difficult to shake Xiaomi's dominance, vendors have begun to build partnerships with leading e-commerce players and are challenging the status quo."

Doshi adds that alongside the growth of the online smartphone market in India, Amazon and Flipkart are also expected to emerge as the "true winners."