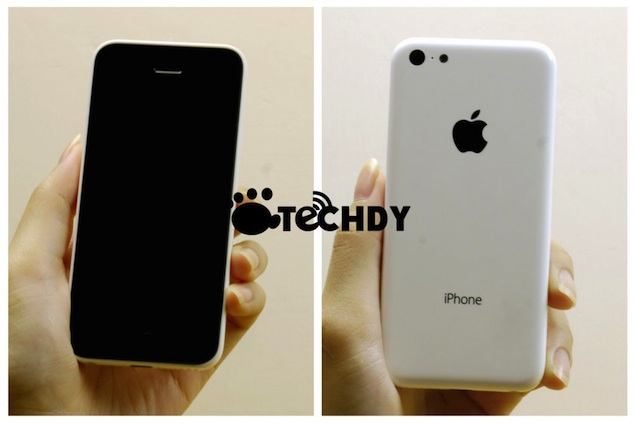 Although Apple has never acknowledged or even hinted that a budget version of the iPhone is in the pipeline, it doesn't stop leaks of what indeed could be the much touted affordable iPhone from making an appearance on the inter webs.

The latest in the series could go as one of the most high profile leaks if true as it showcases the purported budget iPhone in all its high definition glory with an edge to edge look of the phone. Firstly, yes the phone's back panel does match the colourful panels that appeared over the course of the last two weeks, barring the fact that this one comes in White colour.

The pictures and the video of the phone appeared on the blog of Techdy which claims to be the fastest channel for innovative technology products with tie-ups with 20 designers in Taiwan lined up with manufacturers located in Taiwan, Shanghai, Dongguan and Shenzhen. Interestingly, the blog is written by Chris Chang, the Editor-in-chief of M.I.C. Gadget blog which had leaked some parts of the iPad 3 in the past.

The video and pictures show the same plastic polycarbonate body back panel that appeared in recent leaks, this time in glossy White. According to the blog post the budget iPhone will be made substantially from plastic but 'the plastic chassis does not feel cheap at all.' To give some perspective, it even adds,"Unlike the plastic build quality of the Samsung Galaxy phones, the plastic material used on the budget iPhone feels more sturdy."

The blog suggests that the low cost iPhone will have a 4-inch screen and 'a shape that's similar to Apple's original iPod.' We'd beg to differ when it comes to the latter, though.

At the bottom of the phone, there's a small hole for the second microphone, next to the 3.5mm headset jack port, two screw holes with the Lightning connector port at the centre, and four holes for the speaker towards bottom right.

It's worth pointing out that the rear shell does not have any buttons or even a SIM-tray, though it does have holes at the designated places in line with the iPhone 5. Perhaps this is still a stage away from the final product.

We'll still take this with a pinch of salt as it could just be a knock-off of the leaked panels to create some buzz, The company is even selling its own Android phone based on the same design in the same blog post, which makes the whole leak a little more fishy.

A few days back, French website Nowhereelse.fr had shared a couple of pictures that originally appeared on a Chinese website depicting Red, Yellow and Green plastic shell cases of what looks like the back of a new variant of iPhone.

Another picture of the rear shell that appeared in April, shared by case manufacturer Tactus, matches the new shell in terms of the overall design, including the position of the camera lens, microphone and flash holes, and even that one was White in colour. The case maker had said that the cheaper iPhone would be available in Black, White, Blue, Red and Yellow colours, citing the 'factory producing this secretive project' as a source. Tactus had informed that the actual phone might be around 9mm thick, 120mm in height and around 62-65mm in width, making it both taller and wider than the iPhone 4 and 4S.

KGI Securities analyst Ming-Chi Kuo had also confirmed in one of his research reports a plastic shell for the budget iPhone and had said that Apple was finding it difficult to keep the plastic shell of the low-cost iPhone as thin as it would like.
Comments

Shopping through smartphones on the rise: Report
BSNL to invest Rs. 4,000 crore for network expansion