Samsung Galaxy J8 has received a new software update that brings the ability to adjust the brightness automatically despite the lack of an ambient light sensor. The feature that the new update includes essentially uses the selfie camera of the Galaxy J8 to adjust the amount of brightness. The latest software update also brings support for dual VoLTE as well as AR Emoji, the feature that debuted on the Galaxy S9 earlier this year to counter Apple's Memoji. Notably, the AR Emoji feature also recently reached the Galaxy J7 Duo.

The latest software update on the Galaxy J8 brings the feature to enable auto brightness using the selfie camera. The feature essentially captures the selfie each time when the user unlocks the phone to measure the current lighting conditions. However, it doesn't store the selfies for later use. You can enable the newly emerged auto brightness feature by going through the Settings menu or directly through the notification panel.

As SamMobile notes, Samsung will use the photos from the frontal camera to understand the lighting conditions. This will have some impact on the battery life of the phone. However, it eventually brings the ability to adjust the brightness levels automatically even on the hardware that doesn't have an ambient light sensor to measure lighting conditions. The feature could also make way to other Samsung phones, including the Galaxy J4 and Galaxy J6 that both don't have an ambient light sensor. 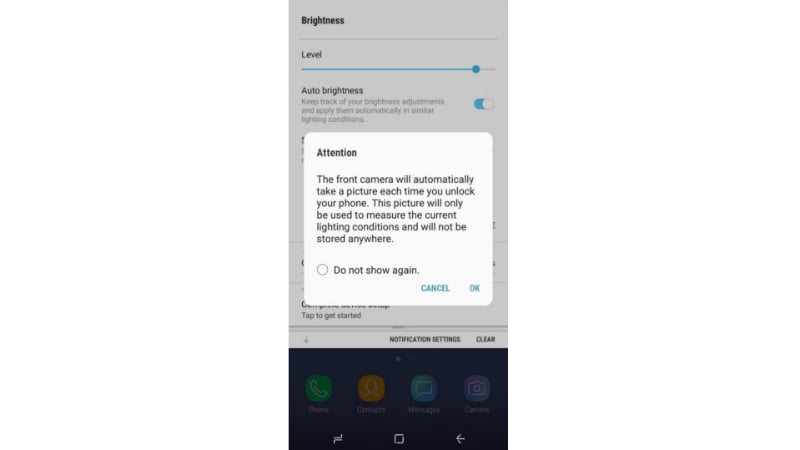 It is worth mentioning here that the Android Go-backed Galaxy J2 Core comes preloaded with the same auto brightness feature as we specified in our review.

Aside from the auto brightness feature, SamMobile notes that the update carries software version J81GDDU2ARJ4 brings dual VoLTE support to the Galaxy J8. The update also brings AR Emoji to the smartphone. It is safe to presume that the augmented reality (AR) powered feature won't be as finish as the AR Emojis available on the flagship Galaxy models, including the Galaxy S9 and Galaxy Note 9. Nevertheless, it finally expands the feature to budget Galaxy models.