Bowing to Critics and Market Forces, RIM's Co-Chiefs Step Aside 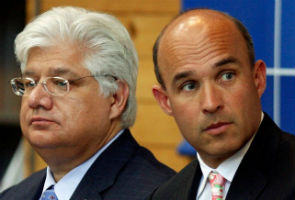 Highlights
Jim Balsillie and Mike Lazaridis, who made the BlackBerry a leading business tool but then presided over its precipitous decline, said they would step down on Monday as co-chairmen and co-chief executives of Research in Motion.

The two men, in developing the innovative device that was the first to reliably deliver e-mail over airwaves, turned a tiny Canadian company into a global electronics giant. But they are stepping aside after disappointing investors and leaving customers wondering whether RIM still has the ability to compete, and perhaps even survive, in the rapidly changing markets for smartphones and tablet computers.

Stiff competition from the Apple iPhone and phones using Google's Android software drastically eroded RIM's share of the American smartphone market to about 9 percent in the third quarter of 2011 from nearly half the market two years earlier, according to Canalys, a market research firm based near London. The company's stock price reflected that by dropping about 75 percent in the last year.

But while Mr. Balsillie and Mr. Lazaridis, who have become the targets of some disgruntled shareholders, are stepping aside, investors and others looking for changes in the company's strategy may be disappointed.

The company named Thorsten Heins, currently one of RIM's two chief operating officers, as chief executive. He pledged during an interview on Sunday to follow the strategy Mr. Balsillie and Mr. Lazaridis set in place.

Mr. Heins said he was staking the company's revival on a new line of phones and a new operating system known as BlackBerry 10. Over the last year, that project has run into a series of delays. The new phones are not expected until the end of 2012, almost five years after the appearance of the first iPhone.

RIM has many other problems, including its PlayBook tablet computer, which lacked crucial features like e-mail when it was introduced; it is now being sold at prices below RIM's manufacturing cost. But Mr. Heins echoed his predecessors when he said that RIM was, in fact, still a success story.

"We are still very, very convinced that this was the right path to go," Mr. Heins said. "Now, were there bumps in the road? Sure, but with the kind of growth we had it is not uncommon to hit bumps in the road."

Barbara Stymiest, a former chief operating officer of the Royal Bank of Canada, will become chairwoman of the company. RIM's share price rose this month after a report that Ms. Stymiest, who has no background in electronics or consumer products, would become chairwoman.

Mr. Lazaridis, who co-founded RIM with a childhood friend in 1985, will become vice chairman and head a new "innovation committee" of the board. He said in an interview on Sunday that despite his changed status, he intended to remain active in company affairs.

Mr. Balsillie will remain a director. He joined RIM in 1992 and invested $250,000 in the then-struggling company, which was producing a variety of electronic devices including a machine for reading bar codes on motion picture film. While his future role will be more limited, he said on Sunday that he would maintain his stake in the company.

Mr. Heins, who joined RIM about four years ago from Siemens of Germany, needs to prevent additional development missteps in the BlackBerry 10 software project. He will also need to convince investors that the new smartphones will find a receptive audience among buyers in a world increasingly dominated by iPhones and Android-based handsets.

The decision by Mr. Balsillie and Mr. Lazaridis to step aside comes after an agreement RIM reached last year with Northwest and Ethical Investments, a mutual fund company controlled by several Canadian credit unions, to study the relationship between RIM's directors and its two senior managers.

While a report and recommendations about the company's governance from a committee of directors, including Ms. Stymiest, was expected to be released shortly, both she and the two former chief executives said the management changes were unrelated.

Mr. Balsillie and Mr. Lazaridis, whose combined holdings rank them among RIM's largest shareholders, said the pending release of the BlackBerry 10 smartphones, as well as the introduction of an updated version of the company's aging operating system, made it an ideal time for them to step aside.