Bleep Charging Cable Can Backup and Store Your Phone's Data 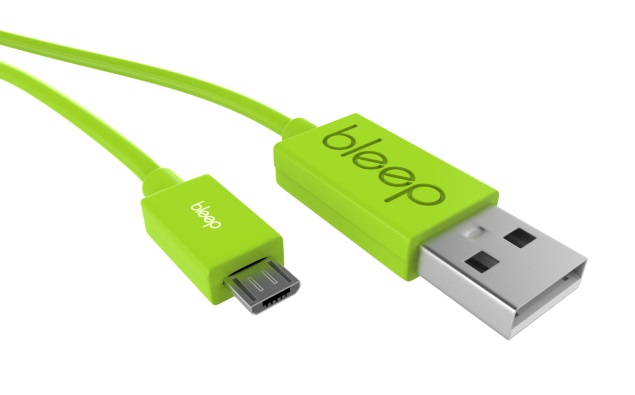 Our weekly series looks at new crowdfunding projects in an attempt to identify products that are interesting, innovative, or just plain cool. Sites like Indiegogo and Kickstarter are full of amazing ideas, and considering the success of Pebble smartwatch and the Oculus Rift virtual reality headset, it is also clear that this is where the next big thing could originate.

This week, we came across the bleep charging cable on Indiegogo. The bleep looks like a normal USB charging cable, albeit in an unusual lime-green colour, which you can plug it into a USB outlet and connect to your phone. It has a Micro-USB connector, but you can get a convertor to connect it to your iPhone as well.

But the really cool thing about the bleep is that the full size USB connector also houses a small memory card. You can use this as a USB pendrive and carry files around, but that's not the cool part.

The bleep also comes with apps for iOS and Android, and automatically backs up the data on your phone while it's connected to the data. The bleep syncs any new data in your contacts, WhatsApp history, pictures, and other stuff like documents and videos as well. To recover this data, all you need to do is plug the bleep into a computer.

In case you want to restore the data to the phone for any reason - maybe you're moving to another device, or maybe you accidentally deleted all your pictures - the app lets you restore files from the cable to your device.

This also sounds like a great way to quickly transfer files between phones and computers, without having to worry about issues like syncing, and since the bleep can replace your normal charging cable, there isn't anything extra for you to carry. You can see the full video below:

The bleep is currently available for pre-order at $40 for the 16GB version, $55 for the 32GB version and $70 for the 64GB version - there are 100 of each, and if that is exhausted a fresh tier will be announced.

The campaign started on Monday, and will continue to accept funds until October 24; the goal is to raise $20,000. Delivery is estimated for August 2015.

ICBC Deal Shows IBM is Still Engaged in China
Croma 1177 Review: A Tablet With a Twist