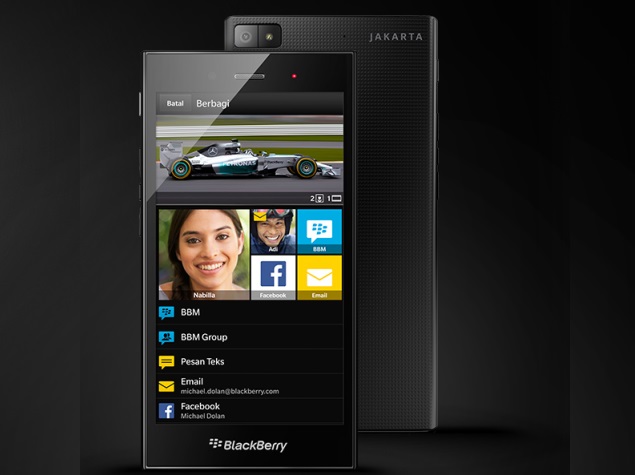 BlackBerry's much-anticipated Z3 smartphone is now up for pre-order in Indonesia. The Canadian company, however, has confirmed that the official unveiling of the Z3 is scheduled for May 13.

The BlackBerry Z3 is now available for pre-order at IDR 2,199,000, which translates to roughly Rs. 11,500. The Z3 is a limited edition model that according to BlackBerry will be made available to Indosat and XL customers for a limited period.

Notably, the Z3 features the 'Jakarta' inscription at the back, which commemorates the launch of the first BlackBerry smartphone manufactured exclusively for the Indonesia market.

Unfortunately, there is no word on the global rollout of the BlackBerry Z3 as of now. Crackberry first reported the pre-order listing.

It's worth mentioning that BlackBerry had announced the Z3 touchscreen smartphone, alongside a Classic model with a keyboard, the Q20, at the sidelines of MWC. The company had already revealed that the Z3 would be priced at under $200 and has been built under a partnership deal with FIH Mobile Ltd - the Hong Kong-listed unit of Taiwanese electronics giant, Foxconn.

The Z3 sports a 5-megapixel autofocus rear camera and also houses a 1.1-megapixel fixed-focus front-facing camera. The smartphone includes 8GB of inbuilt storage, which can be expanded up to 32GB via microSD card. It packs a 2500mAh battery, which is rated to deliver up to 15.5 hours talk time and up to 384 hours of standby time. Connectivity options include Wi-Fi, Bluetooth, 3G, GPS, NFC and Micro-USB.

John Chen, Executive Chairman and CEO at BlackBerry, said in a press note, "The BlackBerry Z3 was designed with our Indonesian customers in mind, to keep them productive and connected with family, friends and co-workers while on the move. Embodying all that BlackBerry 10 offers, the BlackBerry Z3 has a stylish, modern, all-touch design with exceptional productivity features and reliable communications."