BlackBerry services restored after outage in Europe and Africa 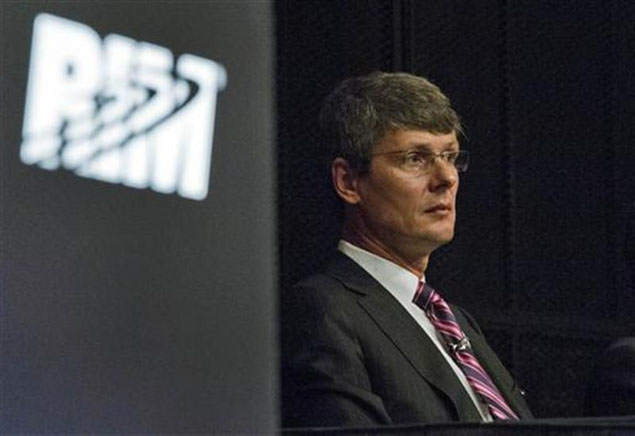 Research In Motion Ltd said it had restored service to millions of BlackBerry users affected by a three-hour service outage in Europe and Africa on Friday, embarrassing the company on the same day Apple Inc launched its new iPhone.

The disruption echoed a much larger failure that took down BlackBerry service for much of the world last October, and boded poorly for the struggling smartphone maker's turnaround plans.

"That RIM has experienced another outage is worrisome - something hasn't been put right," said John Jackson, a wireless analyst at CCS Insight.

Shares of Waterloo, Ontario-based RIM fell more than 6 percent and threatened to breach their lowest point since 2003 less than a week before a quarterly financial report widely expected to show a loss.

Jackson said it was "a bitterly ironic coincidence" that the failure occurred on the same day Apple started selling the iPhone 5 to throngs of fans worldwide who had largely brushed off complaints about a new map feature.

"Maybe it's a recipe for conspiracy theories," he said.

RIM's chief executive, Thorsten Heins, later issued an apology to BlackBerry users who were affected. He said as much as 6 percent of its customer base - or nearly 5 million users - may have experienced email delays of as long as three hours.

"We are conducting a full technical analysis of this quality of service issue and will report as soon as it concludes," Heins said in the emailed statement. "I again want to apologize to those customers who were impacted today."

RIM made similar promises but has yet to provide a complete picture of what caused last year's four-day outage that left tens of millions of frustrated BlackBerry users on five continents without email, instant messaging and browsing. The disruption coincided with the launch of the iPhone 4S, the new model's predecessor.

That fault occurred in a facility in England. It initially affected Europe and surrounding regions before spreading to North and South America. It took days for RIM's chiefs to apologise over the problems and the company's handling of the issue was heavily criticised.

Lessons learned?
"This is an opportunity to demonstrate that RIM has learnt lessons from last year. If it is handled poorly again, it could see a faster erosion of its installed base," said Canalys analyst Pete Cunningham, speaking before Heins' apology.

Cunningham acknowledged that the impact of the current problem, which lasted just a few hours, would likely be minimal.

RIM, with more than 78 million subscribers, has watched its customer base grow much more slowly as the iPhone and a slew of devices that run on Google's Android operating system become more popular. BlackBerry's market share, meanwhile, has shrivelled along with RIM's share price.

The outage comes during a transitional period for RIM, which is preparing to launch a next-generation BlackBerry lineup with a new operating system that the company hopes will help it regain its stride. Those phones are now due for release early next year, after being delayed twice.

"This outage could not happen at a worst quarter ... when all devices are coming out and the Christmas season is approaching. They are close to their last chance, if they miss it, they will not recover," said IDC analyst Francisco Jeronimo.

Over the past year, RIM has suffered several smaller failures to its delivery system, which - unlike rival handsets that rely solely on carrier networks - encrypts and compresses messages.

That was once hailed as a major advantage. The BlackBerry once dominated the corporate market because companies believed RIM was best at protecting enterprise data and prevent the theft of corporate secrets.

But the outages highlight RIM's Achilles heel: BlackBerry messages are routed through its own data centers. That means information is more secure, but it also creates a single point for potential failure.

Messages sent through phones from Apple and other vendors do not travel through any central network, so they do not have that same weakness.

RIM's BlackBerry 10 line will not rely as heavily on RIM's proprietary network, but that is unlikely to be a primary consideration for consumers.

"The problem is it needs to offer something a step-change better and that's becoming quite difficult in the smartphone market," said James Cordwell, an analyst at Atlantic Equities.