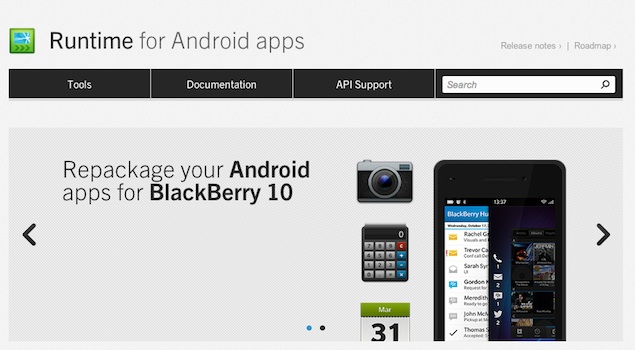 Expect more modern Android apps to work on BlackBerry 10 as BlackBerry has now released an updated BlackBerry Runtime for Android Apps and Plug-in with Android 4.2.2 Jelly Bean in beta.

As promised by the company, earlier this year, BlackBerry has included the updated run time with its new BlackBerry 10.2 SDK for developers which just released.

In addition to this, the 10.2 SDK OS also includes additions to the BB10 native SDK and Adobe Air run times. It brings Adobe AIR 3.5 that features Stage3D for accelerated OpenGL graphics. The update is available for developers using BlackBerry 10 Dev Alpha B and C devices along with the BlackBerry Z10 and Q10 phones.

BlackBerry had added the ability to run Android apps on its PlayBook tablet at the time of its launch, and had even extended the same functionality to BlackBerry 10. The underlying Android runtime version, also known as the 'app player' on the operating systems, however, is still stuck on Android 2.3.3 Gingerbread.

The move would allow BlackBerry OS (Playbook and BB10) to support newer versions of Android apps. A major number of Android apps have been updated both in terms of design (with the Holo theme being introduced after Android 3.0) and functionality.

With apps being one of the major determinants for the success of a mobile OS platform, BlackBerry has been offering initiatives for developers who choose to port their apps to its new BB10 OS. It had run port-a-thons for developers to submit their existing apps, and had claimed that 15,000 apps had been ported to the platform. BlackBerry would definitely benefit from the move as it grapples with the problem of lack of quality apps as developers mostly devote their resources to iOS and Android. It will be easier for them to port their Android apps to BlackBerry 10 without directing a lot of resources and time.
Comments