BlackBerry Q5 up for pre-orders in India 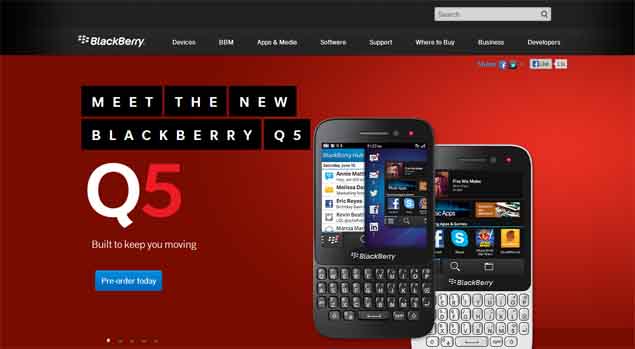 BlackBerry has started taking pre-orders for the mid-range BlackBerry Q5 in India. Company's website in the country does not share the exact date of launch or the price for this smartphone, but redirects you to a list of stores where you can book your pre-order.

BlackBerry Q5 is the second QWERTY smartphone running on the new BlackBerry 10 operating system. This smartphone was first showcased at the BlackBerry Live Conference held in May 2013.

Just like the flagship BlackBerry Q10, Q5 sports a 3.1-inch touchscreen display with a resolution of 720X720 pixels.

BlackBerry Q5 is powered by a dual-core 1.2GHz processor along with 2GB of RAM. The smartphone packs in 8GB of internal storage, which can be further expanded by up to 32GB via microSD card. For camera, there is a 5-megapixel rear camera and 2-megapixel front shooter on board. The smartphone also comes with 2,180mAh battery.

The smartphone is expected to come in four colour options - Black, White, Red and Pink. Considering that it is a mid-range smartphone, we expect the price of this smartphone to be between Rs. 25,000 to Rs. 30,000.

However, in the past BlackBerry has been criticised for overpricing its smartphones. So, we won't be surprised if the company continues to adopt the same strategy for its Q5 smartphone.

In addition to this, the company also introduced new EMI schemes for its flagship BlackBerry Z10 smartphone and its entry-level offering, the BlackBerry Curve 9220.