BlackBerry has launched the BlackBerry Q5 in India at a price point of Rs. 24,990.

The BlackBerry Q5 is the second hardware keyboard (QWERTY) equipped smartphone running the new BlackBerry 10.1 operating system. The smartphone was first showcased at the BlackBerry Live Conference, in May 2013.

Just like the company's flagship phone BlackBerry Q10, the Q5 sports a 3.1-inch touchscreen display with a resolution of 720X720 pixels. However, the screen on the Q5 is an IPS LCD one, unlike the Q10 which sports a Super AMOLED screen.

The BlackBerry Q5 is powered by a dual-core 1.2GHz Qualcomm Snapdragon S4 processor along with 2GB of RAM. The smartphone packs in 8GB of internal storage, which can be further expanded by up to 32GB via microSD card. The phone sports a 5-megapixel rear camera and 2-megapixel front shooter on board. The smartphone also comes with 2,180mAh battery.

The smartphone will come in three colour options - Black, Pure White, and Pure Red and Pink. The company has said that it will offer EMI schemes for the BlackBerry Q5.

In addition to this, the company also introduced new EMI schemes for its flagship BlackBerry Z10 smartphone and its entry-level offering, the BlackBerry Curve 9220. 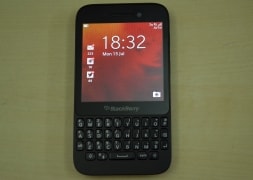