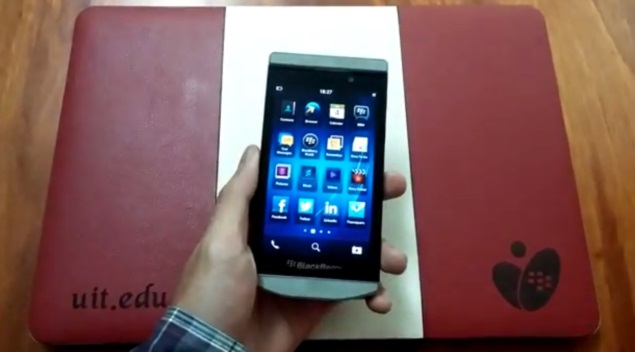 BlackBerry is rumoured to be working on a new premium smartphone dubbed P'9982 with Porsche design, claims a new hands-on video.

A Vietnamese publication, Tinhte has posted a hands-on video of the alleged BlackBerry Porsche P'9982. The purported video of the BlackBerry P'9982 reveals the handset will sport a premium finish with leather rear cover. However, the video has been shot in Vietnamese and not much could be deciphered.

Further, the GSM Arena note that the rumoured BlackBerry Porsche P'9982 runs BlackBerry 10 OS and the company has not changed the software much. The site also speculates that alleged BlackBerry P'9982 might be launched by end of this year and could be priced at $2000.

Prior to this, purported images of Porsche Design BlackBerry 10 smartphone surfaced online. The images suggested that a premium BlackBerry 10 device was in pipeline.

A recent report indicated that Google's Play Store app marketplace could soon land on BlackBerry 10, which would open the door to the world of Android apps for BlackBerry users, with direct install ability. The report suggested that the Canadian manufacturer has been in talks with Google for this purpose.

BlackBerry has said that it's moving its focus from devices to services and software targeted at the government and enterprise segments. However, it will continue to operate its handset business.

BlackBerry's interim CEO, John Chen confirmed the news and said that the company has no plans to shut down the loss-making handset business.