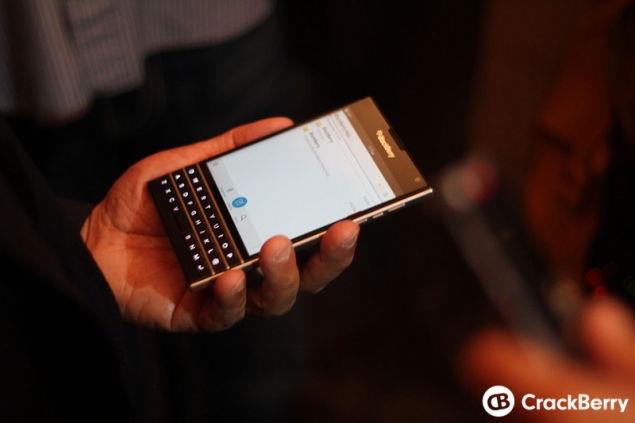 Chen showed off the yet-to-be-announced Passport which will launch in September at an event in London. Crackberry reports that the company chief also showcased the BlackBerry Classic QWERTY smartphone that is slated to hit the market shelves before end of this year, but did not give an exact release date.

Unfortunately, the Canadian handset maker did not reveal any details about the pricing of the BlackBerry Passport, previously codenamed Windermere.

Based on a BlackBerry developer listing, the Passport smartphone is said to sport a 4.5-inch display with a resolution of 1440x1440 pixels and offer a pixel density of 453ppi. Other than the screen information, company has not shared any more details of the device.

Other rumoured innards of the BlackBerry Passport include 3GB of RAM, a 13-megapixel rear camera, and a 3450mAh battery. BlackBerry on Wednesday, along with the announcement of its deal with Amazon for 240,000 Android apps, also said that it would be shutting down its music and video stores on BlackBerry World.

The Canadian handset company also confirmed the launch of its low-cost touchscreen smartphone, the BlackBerry Z3 in India on June 25. The company started sending invites for the event scheduled next week with a tagline that said, "Join us to witness the unveiling of the next generation BlackBerry 10 device."

For the BlackBerry Classic, the company has revealed that it will run BlackBerry 10.3.1 OS, for which a separate SDK would be released for developers.