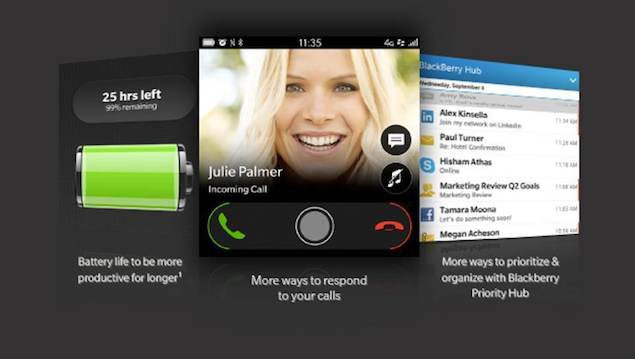 The latest software update - that has already begun rolling out in India and other regions - will activate the FM hardware already present in BlackBerry Z30, BlackBerry Q10 and BlackBerry Q5 handsets. The update also brings actionable lock screen notifications, which means you can now tap to open a message that appears on the lock screen, letting you respond to an important message quickly or to check messages more discreetly.

BlackBerry 10 OS version 10.2.1 brings picture password for quick unlocking that lets you unlock your BlackBerry 10 phone using a combination of a picture and a number (0-9) of your choice, which you place at a particular point on the image. When you try to unlock the phone, the picture will appear along with a grid of random numbers. To unlock, simply drag the grid so the number you selected overlays the particular point on the image.

The update includes a new feature that lets you filter messages and notifications in the BlackBerry Hub using a pinch gesture. The release also brings a new incoming call screen that lets you swipe to the left to answer or swipe right to ignore a call. If you can't take the call right now, you can respond via BBM, SMS or email by choosing from a list of standard automated responses or with a custom message.

Other new features in the update include SMS and email groups, customisable quick settings menu, an offline reading mode in the browser, optional automatic software updates, device and battery monitor, and the ability to set an account as your preferred contact sync option.

While some users have already reported receiving the update, in case you bought your BlackBerry 10 device from an operator, it may be a while before the update shows up on your handset, as the operator needs to finish its own testing before giving the rollout a green light.