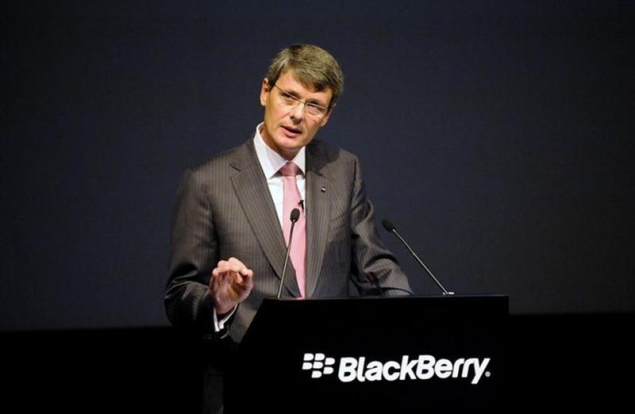 BlackBerry Ltd signaled on Tuesday that a licensing deal, or even an outright sale of the company, was still a possibility, pleasing shareholders still reeling from the disappointing debut for its new line of smartphones.

Chief Executive Thorsten Heins, responding to a question about whether he was looking into strategic alternatives, said he is open to all options that create value for shareholders. He emphasized that the company has so far focused on creating value through the launch of its new devices powered by an all-new BlackBerry 10 operating system.

"This is a long-term transition for the company, but I can assure you that we're pushing very hard," Heins said at the company's annual shareholder meeting. "BlackBerry will pursue every opportunity to create value for shareholders."

His remarks that BlackBerry was also open to any and all licensing opportunities, sent shares higher in morning trading.

John Goldsmith, deputy head of equities at Montrusco Bolton, which owns more than 1.5 million BlackBerry shares, believes that BlackBerry may well be pressed into striking such a deal.

"I think they're on a very short leash," said Goldsmith, referring to BlackBerry's management. "I wouldn't be surprised if within the next two quarters there is a definitive announcement with regard to other options that this company could be looking at whether that's putting itself for sale or some other option."

The company's stock had dropped more than 30 percent after it posted disappointing second-quarter results in late June and forecast an operating loss in the current quarter.

A bigger concern for investors, was the fact that it sold fewer-than-expected BlackBerry 10 devices in their first full quarter on the market, offering little evidence that it could quickly win back market share from Apple Inc's iPhone, Samsung's Galaxy devices, and other phones powered by Google's Android operating system.

Even so, some investors believe many other companies would relish the prospect of getting their hands on the new platform.

"I can see why this guy is confident," said Ross Healy, a portfolio manager with MacNicol & Associates, whose clients own BlackBerry shares. "He is talking about partnerships and being open to talks and I don't think you say that unless you've really had a talk or two with interested parties - and that gives you some confidence."

At the meeting, held at BlackBerry's home base in Waterloo, Ontario, Heins conceded that BlackBerry has a tough road ahead as it attempts to turn around its fortunes, but he insisted it was on the right track.

Heins said BlackBerry was already seeing small signs of market-share gains in the top-end of the ultra-competitive smartphone market.

"Before you go into any strategic option, I think you have to create value. And the value of the company 15 months ago was way less than what it is today," he said.

Clock ticking
Despite the company's confident tone, many investors agree that the clock is ticking for BlackBerry, which is caught in a squeeze on both the high- and low-ends of the smartphone market.

BlackBerry 10 devices hit store shelves this year just as the high-end smartphone segment had begun to show some signs of saturation. Last week, Samsung reported results that fell shy of expectations, while Apple earlier this year reported its first quarterly profit decline in more than a decade.

On the mid- to low end, competition is growing intense, with Chinese manufacturers such as Huawei Technologies and ZTE gaining ground.

Even so, BlackBerry said it remains determined to stick to its plan and is not re-thinking its strategy in any manner.

"We as a board remain completely supportive of management," said the company's chair, Barbara Stymiest, adding that she was confident the turnaround plan would succeed.

Shareholders voted on Tuesday to elect all the company's director nominees to its board. They also approved the plan to change the company's name to BlackBerry Ltd from Research In Motion Ltd, a move that had been announced in January.

BlackBerry shares closed almost 1 percent higher at $9.64 on the Nasdaq on Tuesday.