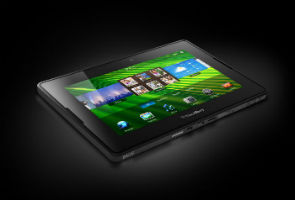 Highlights
BlackBerry maker Research in Motion (RIM) is banking on Indonesia and other populous markets for growth in Asia, while it faces intensifying competition worldwide from rivals like the iPhone.

The Canadian firm had one of the most prominent stands at the CommunicAsia telecom fair that ended Friday in Singapore, where industry executives gather annually to check out new technology and seal deals.

"We are in a great spot. When I think about the (Asian) markets, I have a big smile on my face," RIM's regional managing director Gregory Wade told AFP at the expo.

Technology research firm IDC estimates that RIM shipped 1.5 million BlackBerry devices to Asia in the first quarter of this year and since 2004 has sold at least 8.5 million units in the region.

Asia accounted for 11 percent of RIM's global shipments in the first quarter of 2011, compared to eight percent for all of 2010, it said.

"There is a huge adoption of technology, consumers are making that leapfrog," he said.
Indonesia, the Philippines and Thailand have a combined population of 400 million, and Indonesians have a particular fondness for BlackBerry's instant-messaging function, which spares them from texting charges.

"If you look at the countries he (Wade) mentioned, those are good success stories for them despite the beating they are getting globally," said Byan Ma, an analyst with IDC.

"In Indonesia, everyone wants to have a BlackBerry."

Waterloo, Ontario-based RIM was once the frontrunner in the high-margin smartphone market when it introduced the first BlackBerry device in 1999, which integrated email into a handset in a secure and reliable way.

The gadget was an instant hit, especially with corporate users.

But now, according to technology research company Gartner, RIM ranked fourth in the smartphone market globally in the first quarter of 2011 with a 12.9 percent share based on operating systems -- behind Google's Android, Nokia's Symbian and Apple's iOS.

At CommunicAsia, RIM showcased the Playbook, its answer to Apple's iconic iPad.

The Playbook, which boasts a seven-inch (17.8-centimeter) touchscreen, was released in April but the market's reaction has been mixed in RIM's key North American market.

RIM said it shipped about 500,000 Playbooks in the three months to May 28, and sales start this month in Asia.

Roberta Cozza, an analyst with Gartner, said the Playbook was a "solid device" but like the rest of the iPad challengers, it lacks a well-supported "ecosystem" of applications similar to Apple's.

"Even Android tablets are struggling to deliver value to the consumers," Cozza said.

Android, an operating system developed by Google, is the software of choice among several iPad challengers like Samsung, while RIM has its own proprietary software.

"All the vendors are focusing on the hardware features but this is not where the game is," Cozza said.
Comments