BlackBerry maker unveils its new line, and a new name 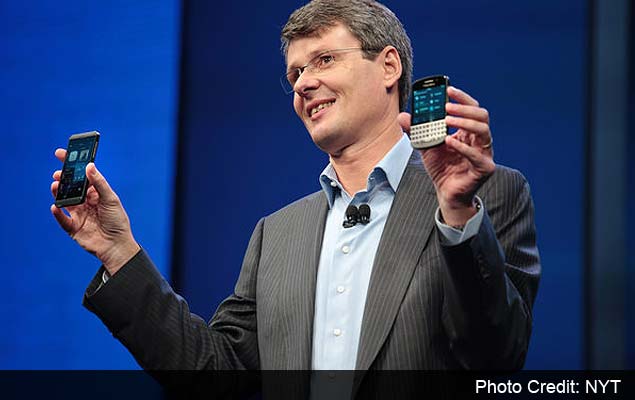 One of the most awkwardly named companies, Research in Motion, has decided it should no longer have to define itself as the maker of BlackBerry smartphones every time the company is mentioned.

In an event on Wednesday in New York to unveil a line of new smartphones and new software to operate them, Thorsten Heins, the company's chief executive, synchronized the names as BlackBerry. But because the new name is now tied to the company's hopes of restoring its main product's status as a symbol of executive cool, the change carries some risk.

Frank Boulben, chief marketing officer of BlackBerry, said that Research in Motion had become more confusing than inspired. "We thought this was time to symbolize a real change with a name change," Mr. Boulben said. "We wanted to have one brand, one premise, to focus all of our marketing efforts."

Those efforts will reach new heights on Sunday, when BlackBerry will run an ad during the Super Bowl promoting the BlackBerry Z10, a touch-screen phone, and the BlackBerry Q10, a phone that combines a traditional BlackBerry physical keyboard with a smaller touch screen.

The new name was the biggest surprise in Mr. Heins's presentation. The company began demonstrating the touch-screen phone and operating system in May and also made prototypes available to app developers at that time.

But Mr. Heins kept the focus on the phones. "Today represents a new day in the history of BlackBerry," he said. "These BlackBerry 10 devices are absolutely the best typing experiences in the industry."

Analysts, technology reviewers and app developers with advance access to the BlackBerry Z10 and the BlackBerry 10 operating system liked the Z10, calling it the company's first competitive touch-screen phone.

But the BlackBerry 10 arrives long after Apple's iPhone and phones using Google's Android operating system have come to dominate the smartphone market, so its success is anything but assured. According to IDC, BlackBerry now holds just 4.6 percent of that market, about one-tenth of its peak market share.

Analysts are concerned about how long it will take for the phones to go on sale in the United States. BlackBerry said the Z10 would be available in Canada on Feb. 5 and in the United States in March. Verizon Wireless announced that it would sell the Z10 for $200 with a two-year contract. BlackBerry 10 phones will also be carried by AT&T, Sprint and T-Mobile, but those companies said they would announce prices later.

Mr. Heins, who took over as chief executive a year ago, said the company would release the keyboard model, the Q10, in April. "I think the longer the time between announcement and availability these days, the worse it is," said Jan Dawson, an analyst with Ovum. "It's especially sad that it'll likely be a month from that big Super Bowl spend to when it launches."

Physically, the Z10 resembles an iPhone 5 with its corners snipped off. Unlike its competitors, the Z10 lacks a button to take users back to a home page and relies entirely on users swiping their fingers across the 4.2-inch screen from different directions to summon features or menus.

While the Z10 lacks a physical keyboard, the main attraction of BlackBerrys for many current users, the company said it had developed software that should alleviate some of the inadequacies of on-screen typing. For instance, it will offer word suggestions that can be selected with a flick of a finger.

The company said on Wednesday that more than 70,000 BlackBerry 10 apps were now available.

BlackBerry 10 server software will allow corporate and government users to divide employees' BlackBerry 10 phones into separate work and personal spheres and give I.T. managers complete control over the work spheres.

The company's former name came to its co-founder Mike Lazaridis in 1984 while he was watching a television program about football players using ballet lessons to improve their speed. He saw the words "poetry in motion" on the TV screen and, according to Rod McQueen, author of "BlackBerry: The Inside Story of Research in Motion," Mr. Lazaridis said, "I knew what to do."

BlackBerry joins a long list of companies that have changed their names in an effort to convey a new beginning. Some of the changes, like Apple's decision to drop "Computer" from its name in 2007, have been subtle. Apple made that move to reflect its expansion into hand-held devices.

Other changes have been more significant. In 2003, Philip Morris, the cigarette and food giant, became the Altria Group to distance itself from the negative aura surrounding smoking. Interstate Bakeries adopted the name of its main cupcake product, Hostess Brands.

In 1998, Research in Motion sought professional advice and hired Lexicon Branding - which created Pentium for Intel and PowerBook for Apple - to come up with the BlackBerry name.

BlackBerry's old name is not the only thing disappearing. Nick Manning, a spokesman for the company, said that BrickBreaker, a BlackBerry game with a cult following on Wall Street, would not be included on the new phones.