A long time after the existence of its first-generation model, BlackBerry is now apparently developing the sequel of the BlackBerry KEYone that could debut as the BlackBerry KEY2. The unannounced smartphone has been spotted on China's TENAA certifications website and its testing unit has allegedly been leaked ahead of any formal confirmation. The TENAA listing shows a dual rear camera setup on the BlackBerry handset that carries model number BBF100-4. The leaked images, on the other hand, give a closure look at its design and highlight all the key differences between the BlackBerry KEYone and its successor. In January, BlackBerry Mobile President Alain Lejeune confirmed that the company is working on at least two new smartphones for this year. It, therefore, appears that the BlackBerry KEYone successor could be one of the upcoming models by the Canadian company.

Apart from these distinctions, the BlackBerry Athena looks quite similar to the BlackBerry KEYone. It sports a full QWERTY keyboard that is likely to support gestures and a multitouch-supported display that is expected to come in 3:2 aspect ratio. On the top, the smartphone has a 3.5mm audio jack, while its bottom has a USB Type-C port. The TENAA listing also highlights that the handset has a 4G LTE and includes dual-SIM support.

Coming towards the leaked images, which have been posted on CrackBerry, the unannounced BlackBerry smartphone appears to have a plastic build. The keys on the full QWERTY keyboard of the handset also have a matte finish. Moreover, the handset surfaced on the image carries a "Not for Sale" tag - suggesting it to be a testing unit. 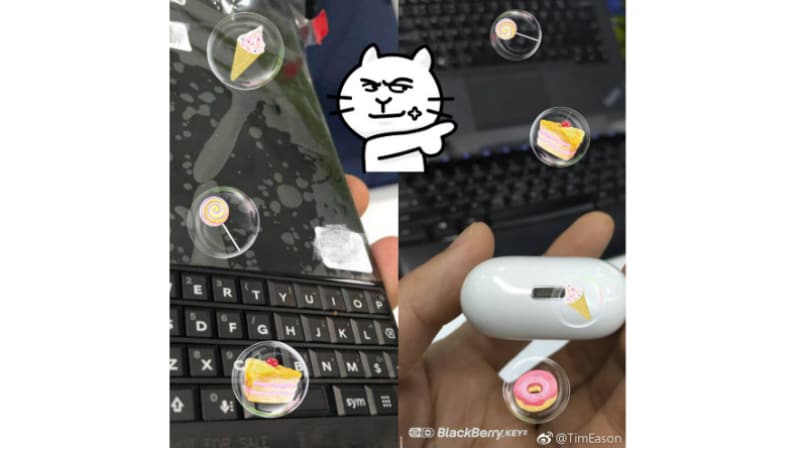 Neither the TENAA listing nor the leaked images confirm any specifications of the smartphone that is considered to be the successor to the BlackBerry KEYone. However, there are some rumours that the handset will debut in June with a Snapdragon 660 SoC, coupled with 6GB of RAM, and Android Oreo.

The BlackBerry KEYone was launched in India in August at Rs. 39,990. The dual-SIM smartphone runs Android 7.1.1 Nougat and features a 4.5-inch IPS LCD panel with a 3:2 aspect ratio. It is powered by an octa-core Qualcomm Snapdragon 625 SoC, paired with 4GB of RAM, and features a 12-megapixel camera sensor on the back with an f/2.0 aperture. Besides, the handset has 64GB of onboard storage that is expandable via microSD card (up to 2TB) and packs a 3505mAh battery.