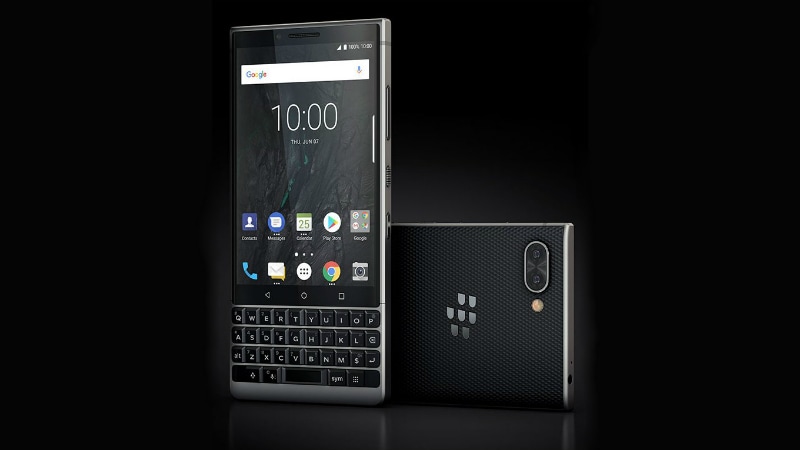 BlackBerry KEY2 specifications and price details have emerged online ahead of its formal debut that is scheduled in New York City for Wednesday, June 7. The new BlackBerry model, which will be the successor to the BlackBerry KEYone, appeared on Geekbench in the past that highlighted its benchmark results. BlackBerry also last month released a teaser video to give a glimpse of the upcoming handset. The teaser confirmed that the new offering will come with a full QWERTY keyboard and a touch-supported display as well as have a metal frame and a dual rear camera setup.

None other than reputed tipster Evan Blass has leaked the specifications and price details of the BlackBerry KEY2. The source also posted few renders through his widely popular Twitter account to show what's new in BlackBerry's latest offering. The renders highlight the touch and type form factor of the upcoming smartphone and detail its premium design. On the back, there is a textured panel that seems to have a rubberised finish. This also enlightens the dual rear camera setup as well as the BlackBerry logo that comes in silver colour. The front of the smartphone has the regular BlackBerry-style keyboard and the touchscreen panel.

In terms of specifications, the list leaked by Blass shows that the BlackBerry KEY2 runs Android 8.1 Oreo and features a 4.5-inch full-HD (1080x1620 pixels) IPS display with a 3:2 aspect ratio and Corning Gorilla Glass 3 protection. The smartphone is powered by an octa-core Qualcomm Snapdragon 660 SoC, coupled with 6GB of RAM. Further, the dual rear camera setup is found to have two 12-megapixel sensors - one of which has an f/1.8 aperture, 79.3-degree lens, while the other one sports an f/2.6 aperture, 50-degree lens. There is also dual-tone LED flash, and the handset has HDR and 4K video recording support. Also, the new model includes an 8-megapixel selfie camera with full-HD (1080p) video recording support.

The BlackBerry KEY2 is spotted to have 64GB and 128GB storage options that both will be expandable via microSD card (up to 256GB). In terms of connectivity, the handset has FM radio, 4G LTE, Wi-Fi, Bluetooth v5.0, GPS/ A-GPS, NFC, USB Type-C, and a 3.5mm headphone jack. Sensors on board, as per the leaked sheet, include an accelerometer, ambient light, gyroscope, magnetometer, and a proximity sensor. The smartphone also has a fingerprint sensor embedded under the spacebar key. Besides, it packs a 3500mAh battery that supports Qualcomm's Quick Charge 3.0 and measures 151.4x71.8x8.5mm.

Specification-wise, the BlackBerry KEY2 does have a bunch of upgrades over last year's BlackBerry KEYone. The new model, however, has the same display panel that featured on its predecessor.

As far as the pricing is concerned, Blass noted that the BlackBerry KEY2 will be available in the US with a starting price tag of $649 (approximately Rs. 43,400). This is notably higher than the price of the BlackBerry KEYone that was launched in the US at $549 (around Rs. 36,700).

We need to wait until the official launch to understand the availability of the BlackBerry KEY2.

Moto Z3 Play Mentioned in Moto Voice Update Ahead of Launch
PlayStation Countdown to E3 2018: How to Watch and What to Expect