BlackBerry Fights Back With Budget Z3 Smartphone Launch on Tuesday 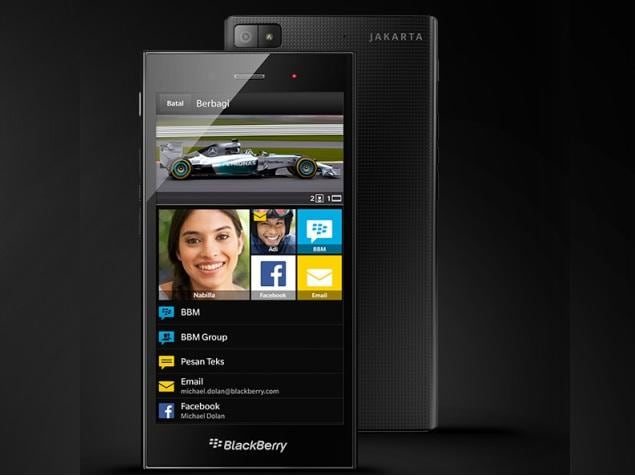 BlackBerry will this week launch a new budget handset in Indonesia, one of its last bastions, a major step in the ailing smartphone maker's fightback against titans Samsung and Apple.

The BlackBerry Z3, which is designed for Indonesia but will likely be introduced in other emerging markets later, is the first new BlackBerry phone since chief executive John Chen took the helm of the crisis-hit company in November.

The handset is also the first to be produced from the Canadian firm's partnership with Taiwanese tech giant Foxconn, which makes gadgets for Apple, and is a key test of whether the new strategy will work.

The company believes the device will be a hit in Indonesia, where many have remained loyal to BlackBerry, with a spokesman saying that "this product will deliver something that should resonate with consumers".

But analysts believe it may already be too late for a comeback by the company that pioneered modern smartphone culture but has been unable to keep up with competition from Apple's iPhone and handsets using the Google Android operating system.

Recent years have been dismal for BlackBerry, and it has suffered heavy losses and slashed thousands of jobs.

The company even put itself up for sale last year but abandoned hopes of finding a buyer several months later, and ousted chief executive Thorsten Heins.

Since Chen took over, there have been small signs of improvement. The company reported a loss of $423 million in the three months to March 1, which was not as bad as had been feared.

As part of its turnaround strategy, the smartphone maker announced the tie-up with Foxconn in December, which involves transferring to the Taiwan company manufacturing and inventory management, while allowing BlackBerry to focus on software and services.

BlackBerry has chosen to launch its first new phone from the partnership in Indonesia, Southeast Asia's biggest economy with legions of social media-mad young consumers, where its devices remain popular but it has nevertheless lost ground in recent years.

Low retail price
The phone has a five inch (13 centimetre) touchscreen, like most of BlackBerry's newest handsets which do not have the physical keyboards of the older devices.

It is designed specifically with Indonesian consumers in mind. The BBM messaging service -- wildly popular in Indonesia -- comes loaded with pictures of local cartoon characters for users to send to one another.

There is also a limited edition with "Jakarta" engraved on it.

BlackBerry believes the low price - it will retail for around $200 - will be a particular selling point.

Previous phones released on the new BlackBerry 10 operating system in Indonesia were more expensive, such as the Z10 which sold for around $700, and received only a lukewarm response.

Online pre-orders, which began on April 28, have been healthy, according to retailers.

"The response is positive and hundreds of units were sold in less than a week after the pre-order started," said an employee at vendor Global Teleshop, who declined to be identified.

The phone will be launched on Tuesday in Jakarta and will go on sale in the following days.

BlackBerry has refused to say which emerging markets it might take the phone to next, but analysts speculated it would likely be others in Southeast Asia.

But even the picture in Indonesia, one of the company's healthiest markets, is increasingly dire and the Z3 may be too little too late, analysts warn.

"The launch of this device is really BlackBerry's final stand in the Indonesian market," Sudev Bangah from telecoms consultancy IDC told AFP.

IDC says BlackBerry's market share peaked in Indonesia in 2011 at about 43 percent and remained healthy in 2012 only to suffer a collapse in 2013, when it fell to around 13 percent.

And Bangah said it was unlikely the new device would be BlackBerry's saviour in Indonesia.

"Do we expect a mass exodus to this device? Hardly likely," he said, adding IDC expected BlackBerry's market share to fall to around 10 percent this year.