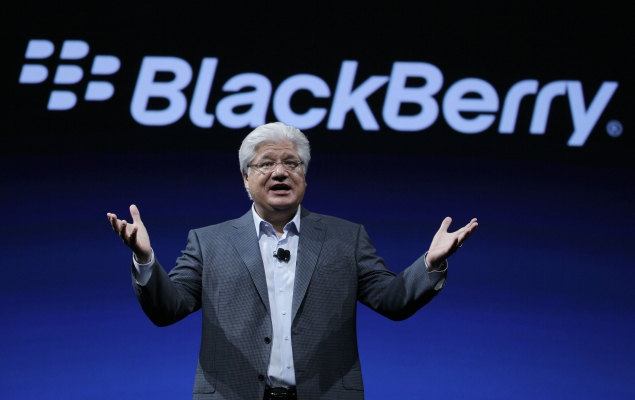 BlackBerry Ltd co-founders Mike Lazaridis and Douglas Fregin are considering a bid to buy the struggling smartphone maker, according to a securities filing on Thursday, raising the prospect of an alternative to a $4.7 billion offer led by its top shareholder.

The filing did not indicate whether the pair was planning to join or to present an alternative to a tentative $9-a-share bid by a group led by Fairfax Financial Holdings Ltd. Fairfax, which is headed by financier Prem Watsa, has not yet identified other members of the group.

Lazaridis and Fregin together control some 8 percent of BlackBerry, the filing said. That compares with roughly 10 percent controlled by Fairfax.

Excluding Fregin's shares, Lazaridis controls 5.7 percent of BlackBerry, or about 60,000 shares more than he did at the end of 2012, according to Thomson Reuters data.

Lazaridis, who until early last year was one of BlackBerry's co-chief executives and co-chairmen, appears to be considering "the widest range of options possible," BGC Partners technology analyst Colin Gillis said.

Fairfax declined to comment on the Lazaridis filing, which noted that while Lazaridis and Fregin could make an offer, they could opt to take other steps, including selling their shares.

BlackBerry declined to comment specifically on the news, repeating an earlier statement that it is conducting a robust review of alternatives and would only say more if a deal is done or the strategic review is otherwise ended.

Investors have been skeptical the Fairfax offer will garner the financing needed, and Gillis noted that Lazaridis' interest faces the same challenge because the founders, for now, do not have any funding lined up.

Analysts believe both parties could look to secure financial backing from one or more of Canada's deep-pocketed pension funds. A foreign buyer for Blackberry faces a stringent review under the national security clause of the Investment Canada Act, as BlackBerry's secure servers handle millions of confidential corporate and government emails every day.

Industry executives, lawyers and analysts say that could limit the pool of foreign entities that may be allowed to acquire all, or at least certain parts of the company.

In sign of investor skepticism, BlackBerry's stock has traded well below Fairfax's $9 offer price since the bid was announced it last month, days after BlackBerry warned it would report slumping sales, a big loss and job cuts.

News of the Lazaridis' interest pushed shares in the company a bit higher. The stock turned positive after the news and closed on Thursday up 1.1 percent at $8.20 on the Nasdaq. But it has fallen more than 20 percent since the company warned on its earnings.

Lazaridis signed a confidentiality agreement with BlackBerry on Monday, according to the filing. If a takeover is successful, Lazaridis would become chairman, and Fregin would appoint a director, it says.

Lazaridis and Fregin, who together founded the company then known as Research In Motion Ltd in 1985, have hired Goldman Sachs and Centerview Partners LLC to assist with a strategic review of the stake.

While Lazaridis was a driving force behind the technology behind the BlackBerry, Fregin played a more minor role. He left the company as it grew into a powerhouse that produced what was then the must-have smartphone for professionals and politicians.

Lazaridis served as co-CEO and co-chairman with Jim Balsillie, a marketing specialist who also stepped down from those roles last year as the company's outlook turned dire.

Its travails came to a head in August when BlackBerry put itself on the block after lackluster sales for its new devices.

Sources close to the matter have told Reuters that BlackBerry is in talks with Cisco Systems Inc, Google and Germany's SAP AG among others, about selling them all, or parts of itself. The potential buyers have declined to comment.

Fitbit Force fitness wristband launched with OLED display and smartphone sync
You can Like but you can no longer hide from search: Facebook to users