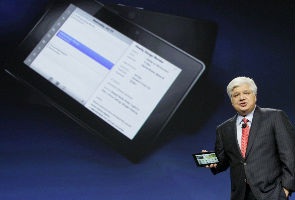 Highlights
Research In Motion (RIM) founder Mike Lazaridis ordered a BBC reporter to stop the interview after he was asked questions about his problems with India and Middle East countries that are seeking access to BlackBerry enterprise emails in view of national security issues. "That's just not fair,'' Mike Lazaridis shot back at BBC technology correspondent Rory Cellan-Jones when he posed this question to the RIM co-CEO at a recent interview.

Looking sideways, a visibly upset RIM boss said, "First of all, we have no security problem. We've got the most secure platform. We've just been singled out because we're so successful around the world."

When the reporter asked whether he could assume that BlackBerry has no issues with India and Middle East countries, Lazaridis said, "No, we don't... we have just been singled because we are successful around the world. It is aniconic product, it is used by businesses, it is used by celebrities, it is used by consumers, it is used by teenagers... we are just singled out just because of our success.''

When the reporter pressed him further on the India question, the BlackBerrychief said, " We are dealing with a lot of issues... we are doing our best to deal with the kind of expertise... ''

The RIM co-CEO exploded when the reporter finally asked him whether he could "confidently tell'' and give "assurance'' to BBC listeners in India and the Middle East whether they could continue using the BlackBerry smart phone without any problems in future.

"The interview is over. You can't use that, Rory. It's just not fair. This is a national security issue. Turn that off,'' the BlackBerry boss told thereporter.

The BBC has posted the video of this portion of the interview on its web site.

The BBC interview followed Lazaridis's recent interview to the New York Times in which he slammed those who are writing off the BlackBerry maker as a "broken brand.''

Though after many deadlines, RIM has given India access to its BlackBerry Messenger (BBM), it has remained non-committal on allowing access to its encrypted corporate service.

India has more than a million BlackBerry users and RIM has set sights on the fast growing market as its share in the North American smart phone market shrinks.

The Canadian wireless giant, whose stock has slipped nearly 20 per cent since last month after forecasts of a less-than-spectacular current quarter, is pinning its hopes on its PlayBook tablet due to hit markets in Canada and the US April 19.