BlackBerry 5G phone will come with a redesigned “clean-sheet keyboard” and have a host of enterprise-focussed security features. 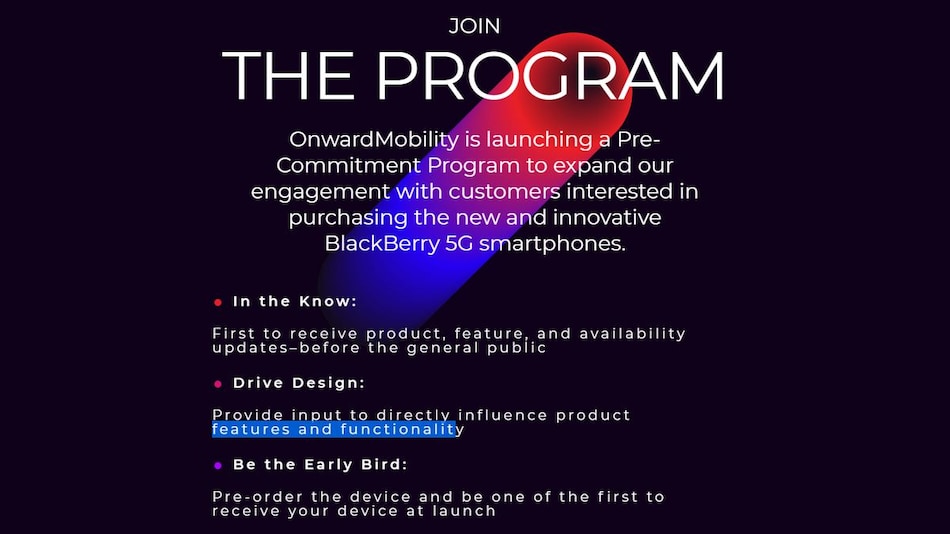 BlackBerry 5G phone that was supposed to release in the first half of this year could be launching soon. OnwardMobility, the latest BlackBerry brand licensee, has launched a programme that offers updates on the upcoming phone. Anyone can sign up for the programme — which is essentially a newsletter — and get updates like features, availability, and more before the general public. Members will also be able to give their inputs regarding functionality. OnwardMobility partnered with Foxconn subsidiary FIH Mobile back in August 2020 to produce the new BlackBerry phone.

BlackBerry KEY2 LE was the latest smartphone from the company and it launched in 2018. It came with the signature physical keyboard and touchscreen design that BlackBerry is known for. Then about two years later, in August 2020, OnwardMobility — a company that has experience in building security solutions for government and enterprise customers — partnered with FIH Mobile to bring a 5G BlackBerry phone. At the time, the company said it will release the phone in the first half of 2021. Now, in the second half of the year, OnwardMobility has shared an update on the BlackBerry 5G phone in the form of a ‘Pre-Commitment Program' wherein members will get regular updates about the phone.

Those who sign up for the programme will receive updates on the product, its features, and availability before the general public. They will also be able to provide their inputs for the features and functionality of the BlackBerry phone. Members will be able to pre-order the phone and receive it at launch. The page mentions “BlackBerry 5G smartphones” which suggests there will likely be multiple offerings.

As for the specifications, no new information has been shared by the company. Back in August last year, the phone was said to be a 5G phone featuring a physical keyboard and a host of enterprise-focussed security features. It was said to be a “sleek”, “feature-rich 5G-ready” phone. It was also touted to come with a redesigned “clean-sheet keyboard.” That's about all the information that is available on the upcoming BlackBerry 5G phone as of now.