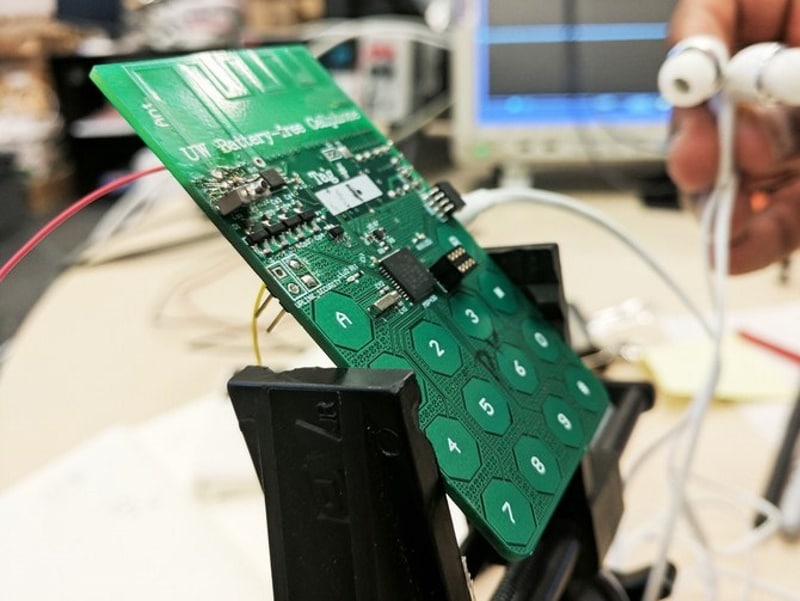 A team of researchers at the University of Washington has come up with a working prototype of a cellphone that doesn’t require a battery to make calls or send text messages – instead, it harvests energy from thin air, more specifically, radio signals. Right now, all it features is an LED light and buttons on a circuit board, however, a more advanced prototype with an E Ink display and better call quality is in the works.

The projected was spearheaded by UW research associate Vamsi Talla, working at the lab of UW CSE associate professor Joshua Smith. Talla has been working on several wireless connectivity projects that have made headlines in the recent past, including the breakthrough Passive Wi-Fi system unveiled last year. The Passive Wi-Fi system, being commercialised by Smith’s startup Jeeva Wireless, uses 10,000 times less power than traditional Wi-Fi systems by utilising backscatter communication technology. Backscatter tech uses reflections of signals (whether existing or new) to communicate, allowing a network of passive and active devices where the signals themselves are a source of power and the medium of communication.

Talla’s also worked on a way to power electronics, including cameras, using Wi-Fi signals. Other work includes a way for power-constrained devices like medical implants to communicate with smart devices by converting Bluetooth signals into Wi-Fi. This use of backscatter communication between more than one type of technology is being called ‘Interscatter’ by the UW team, short for ‘inter-technology backscatter’.

The UW researchers’ work on battery-less smartphones further developed this backscatter communication technology. Along the lines of its Passive Wi-Fi system, which “decoupled the digital and analogue operations involved in radio transmissions” to get create low power Wi-Fi transmissions, the team realised it had to go one step further for cellphone signals.

"Converting analogue human speech to digital signals consumes a lot of power," said Talla in a statement to Wired. "If you can communicate using analogue technology, you're actually more power efficient,” he added, explaining that the battery-less cellphone uses digital backscatter signals to dial the numbers, and then used analogue backscatter signals to make the voice call. As it is the passive device in network, the cellphone will use background radio signals to power it.

Talla notes that for the battery-less cellphone to work, it needs a nearby powered base station that converts the cellphone's signals and connects to the digital cellular network. In the current implementation, Skype is used to connect, and the smartphone has a range of just 15 metres from the base station due to the low-power signals being used by the team. Once the technology is commercialised however, the base station could be a Wi-Fi router or even a conventional mobile base station, which with higher power signals could greatly boost.

For now, the way the prototype works is similar to a radio, requiring the user to press a button to switch between talking and listening. As we mentioned however, Talla is working on a more advanced prototype with an E Ink display that can let the user send texts, better call quality, and perhaps even a camera. He adds that the current price of the prototype – built with readily available components – is less than a normal mobile phone, and the cost will only go down with mass production. One of the concepts that emerged from the development is idea of giving every smartphone a battery-less calling and texting component, to which it falls back when it loses battery power – ensuring the user will always be able to communicate.

Wipro Steps up Local Hiring in US Amid H-1B Visa Uncertainty
Petya Ransomware Is a Wiper, Researchers Claim, With the Aim to Damage