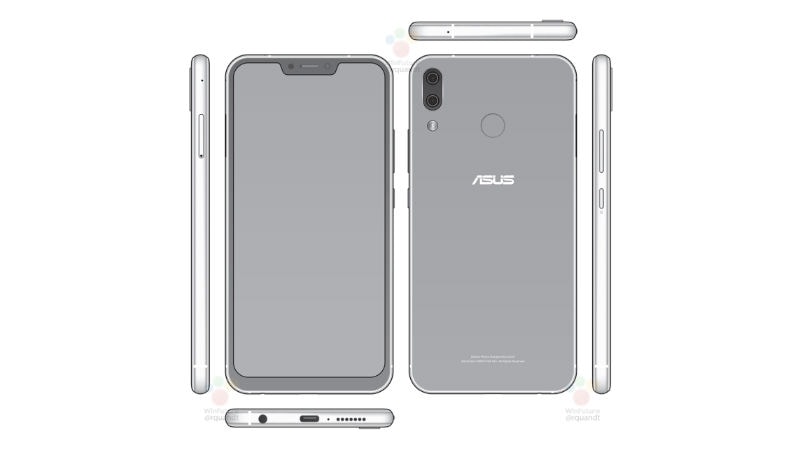 Just days ahead of Mobile World Congress (MWC) 2018, a couple of images showing what it could be the Asus ZenFone 5 have surfaced online. The new ZenFone flagship is apparently featuring an iPhone X-like notch and is expected to debut alongside the ZenFone 5 Lite at the MWC conference that is scheduled for February 27. The Taiwanese company already sent out invites for its press event that will happen just a couple of days after the widely expected Galaxy S9 and Galaxy S9+ launch.

An early render of the ZenFone 5 (ZE620KL) has been leaked by WinFuture.de. The render suggests the presence of a thin-bezel display on the upcoming ZenFone handset that sports a notch on the top. While the notch is similar to the one featured on the iPhone X last year, it is reported to include just a front-facing camera sensor, an earpiece, and a sensor module with an ambient and proximity sensors. This means that you shouldn't expect the anything close to a TrueDepth camera system that was debuted to on the newest iPhone model in September last year to enable facial recognition features, including Face ID. Furthermore, the display panel is touted to have 18:9 aspect ratio with full-HD+ (1080x2160 pixels) resolution.

The ZenFone 5 is rumoured to run Android 8.0 Oreo out of the box and come with a USB Type-C port as well as a 3.5mm headphone jack. On the back, the leaked render shows that the smartphone has a fingerprint sensor and a dual camera setup.

Twitter user Bernardo G da Silva has separately posted a live image of the ZenFone 5. The image purportedly shows how the handset would look in reality. Also, it shows some tweaks on the interface-level to make the space for the notch. For instance, the status bar in the leaked image has a battery icon on the top-right side, while the SIM status is available on the top-left side. Some recent reports claimed that Android P will come with design upliftments to support notches on the next-generation smartphones.

Apart from the flagship ZenFone 5, Asus is in the headlines for planning the launch of the ZenFone 5 Lite. There may not be many similarities between the two new ZenFone models, though WinFuture.de claims that both new handsets will come with aluminium and glass build and have dual SIM variants for certain markets. The ZenFone 5 Lite is also rumoured to have a full-HD+ display with an 18:9 aspect ratio and four camera sensors - two on the back and two on the front.

Details about the price and availability of the ZenFone 5 are yet to emerge. Meanwhile, we can expect some more rumours to hit the Web world.

Want to Track the Tesla Roadster in Space? There's a Website for That
Apple Marketshare in Samsung's Home Country at Record High: Strategy Analytics