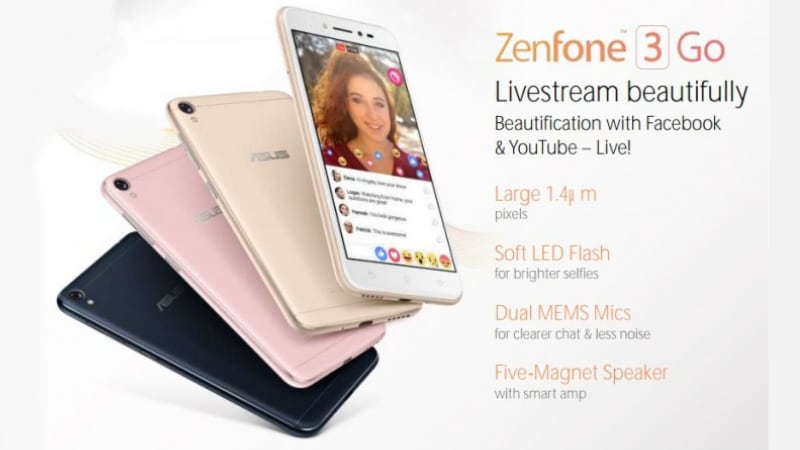 An Italian website Notebook Italia has leaked render image and specifications of the Asus ZenFone 3 Go hinting at its imminent arrival. Looking at the render, the Asus ZenFone 3 Go sees a design overhaul, and now sports a metal build and antenna bands on the top and bottom chin at the back. The camera has shifted to the side and the lens is much smaller than the one seen on its predecessor, with the flash sitting underneath it. There is no button seen on the rear or front, so presumably there won't be a fingerprint scanner on the smartphone. The device is seen sporting capacitive buttons, and is tipped to come in three colours - black, pink, and gold. The speaker and the USB Type-C port are situated on the bottom edge.

The report also leaks the specifications of the upcoming Asus ZenFone 3 Go smartphone, and it is expected to feature a 5-inch HD (720x1280 pixels) display. The smartphone is tipped to be powered by a Qualcomm Snapdragon 410 SoC with 2GB of RAM. It is tipped to offer 16GB of internal storage as well.

As for optics, the Asus ZenFone 3 Go is pegged to sport a 13-megapixel rear camera with 1.4 μm pixel size, a 5-megapixel front camera with soft LED flash for better low-light selfies. Lastly, the report leaks that the smartphone is expected to come with dual MEMS Microphones for noise suppression and five-magnet speakers. While the specifications are rather mediocre, the 'Go' series is generally positioned for those on a tight budget. The expected price of the Asus ZenFone 3 Go is EUR 150 (roughly Rs. 10,800).