Asus gaming brand Republic of Gamers (ROG) on Monday unveiled the ROG Phone alongside a new lineup of gaming products at its For Those Who Dare event ahead of Computex 2018. Asus' first ROG gaming smartphone is touted to be the world's first smartphone with a 3D vapour-chamber cooling system. Additionally, the ROG Phone features ultrasonic AirTrigger touch sensors, a gamer-centric design with side-mounted ports optimised for landscape-mode, an AMOLED display with HDR visuals, a 90Hz refresh rate, and a 1ms response time. The smartphone will compete with Xiaomi's BlackShark gaming smartphone as well as the Razer Phone. For now, Asus has not provided price or availability details of the ROG Phone, but did say it will make its way to India soon.

The key highlight of the Asus ROG Phone is a custom Qualcomm Snapdragon 845 SoC clocked at up to 2.96GHz, along with a gaming-optimised Qualcomm Adreno 630 GPU. Don McGuire, Vice President, Product Marketing, Qualcomm, highlighted the company's partnership with ROG. He said, "Our entirely re-architected Snapdragon 845 Mobile Platform with the gaming-optimised Adreno 630 GPU is designed for speed, minimising thermal throttling and maximising battery efficiency so users can play longer. Snapdragon 845 is engineered to deliver an unparalleled gaming experience; supporting exceptional performance, fast and smooth graphics, and Gigabit speeds whether on LTE or 802.11ad Wi-Fi." Notably, ROG has also partnered with Garena, developer of survival shooter game Free Fire, for the ROG Phone.

ROG also announced a new ROG Delta gaming headset that can be connected to the ROG Phone and other smartphones via USB Type-C port. The ROG Delta features an ESS quad-DAC and drivers with audio signal diversion technology. Asus revealed that the ROG Phone scored 304183 in AnTuTu, ahead of the Xiaomi BlackShark, Samsung Galaxy S9+, Apple iPhone X, and Razer Phone.

The Asus ROG Phone runs ROG Gaming UI and sports a 6-inch full-HD+ (1080x2160 pixels) AMOLED display with 90Hz refresh rate and 1ms response time. The company is also boasting of a 108.6 percent DCI-P3 colour gamut and 10000:1 contrast ratio. As mentioned, it features the Qualcomm Snapdragon 845 processor, with gaming-optimised Adreno 630 GPU. It is equipped with 8GB of RAM. In terms of optics, the smartphone comes with a dual rear camera with 12-megapixel and 8-megapixel sensors. At the front, there is an 8-megapixel selfie camera.

Asus in the ROG Phone has packed up to 512GB of inbuilt storage. Connectivity options include Wi-Fi 802.11a/b/g/n/ac/ad, Bluetooth 5.0, GPS, AGPS, Glonass, USB Type-C port, NFC, and 3.5mm jack. Sensors onboard are an accelerometer, ambient light sensor, compass, gyroscope, proximity sensor, and ultrasonic AirTrigger sensors. It is fueled by a 4000mAh battery that promises 7 hours of Wi-Fi gameplay. The company claims that the battery is capable of getting to 60 percent of charge in 33 minutes. In terms of dimensions, the handset measures 158.8x76.2x8.6mm and weighs 200 grams. 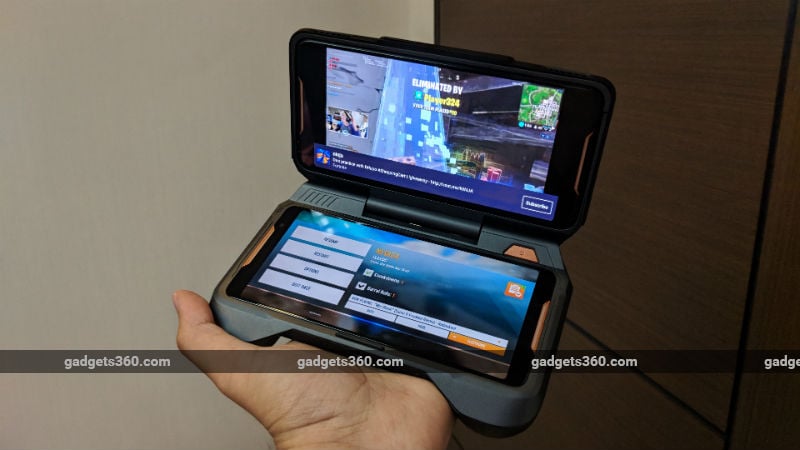