Asus ROG Phone 2 that originally went on sale at 12am today is will start shipping from October 8, Flipkart has revealed. The latest Asus phone will be available for purchase through Flipkart, but its next sale date has not yet been announced. Powered by the Qualcomm Snapdragon 855+ SoC, the Asus ROG Phone 2 is designed for enhanced mobile gaming experiences. The smartphone also features a 120Hz AMOLED display and comes equipped with 30W ROG HyperCharge technology. As the ROG Phone successor, the ROG Phone 2 also incorporates upgraded AirTrigger II ultrasonic sensors, dual surrounding vibration technology, and front-facing stereo speakers with DTS-X Ultra. The handset also houses up to 12GB of LPDDR4X RAM and 512GB of UFS 3.0 inbuilt storage. 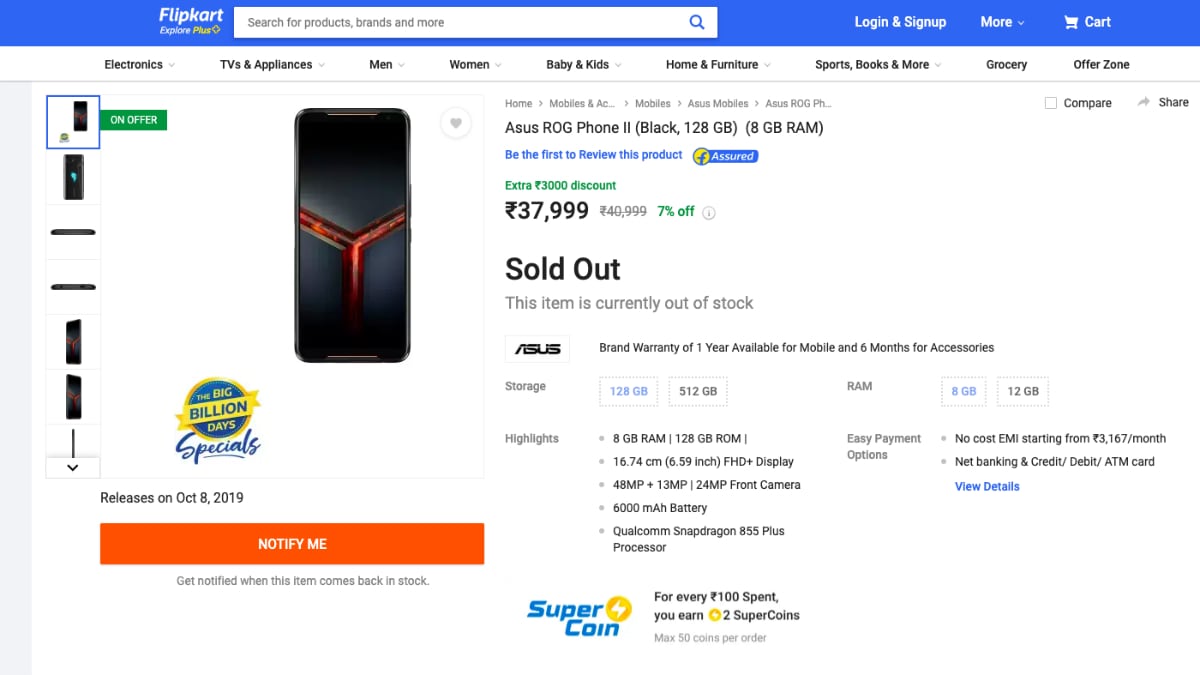 We reached out to Asus India for clarity on the sale date of both variants, and were informed that no next sale date has been announced yet. Asus also confirmed to Gadgets 360 that the release date seen on the Flipkart site is referring to the date the smartphone will ship, and not the next sale.

Alongside the ROG Phone 2, Asus last week launched some of its gaming-centric accessories. There is the TwinView Dock priced at Rs. 19,999, Mobile Desktop station at Rs. 12,999, and the ROG Kunai Gamepad at Rs. 9,999.

The 12GB RAM + 512GB storage variant of Asus ROG Phone 2 comes bundled with the 30W ROG Charger, though it will also be sold separately for the consumers purchasing the 8GB RAM + 128GB storage option. The 30W ROG Charger carries a price tag of Rs. 1,999.

The dual-SIM (Nano) Asus ROG Phone 2 runs Android 9 Pie with ROG UI on top. The phone features a 6.59-inch full-HD+ (1080x2340 pixels) AMOLED display with a refresh rate of 120Hz as well as 1ms response time and 10-bit HDR support. The display panel is also touted to deliver a touch sampling rate of 240Hz and touch latency of 49ms. Under the hood, there is the Qualcomm Snapdragon 855+ SoC, paired with up to 12GB of RAM.

In terms of optics, the Asus ROG Phone 2 has a dual rear camera setup that includes a 48-megapixel primary sensor along with a 13-megapixel secondary sensor featuring a wide-angle lens with a 125-degree field of view. The handset also has a 24-megapixel selfie camera.