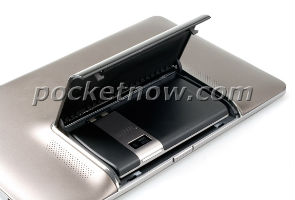 Highlights
Asus's Padfone is the first casualty of leaks that have started ahead of the big Computex 2011 event on May 31.

PocketNow.com has shown leaked images of the rumoured Asus Padfone. We cannot confirm the legitimacy of the images but it seems like the Padfone consists of two units - one is a phone and the other a tablet.

According to the images shown by PocketNow.com, the phone comfortably cradles inside the tablet leaving only a circular opening for the phone's camera. The rear end of the speaker also suggests that it may well have dual speakers.

Previously Asus launched the Eee Pad transformer, which was an Android Honeycomb tablet that included a dock to transform it into an Android netbook. Similarly Motorola launched the Atrix 4G, which also had a keyboard dock, once the phone was docked it became a netbook or a PC, depending on the kind of dock used.

It still remains to be seen how the Asus Padfone will operate, as its specifications will be unveiled on Tuesday at Computex.
Comments