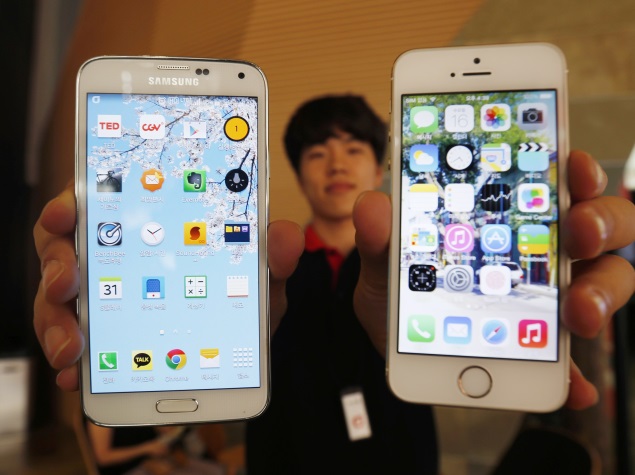 Samsung Electronics Co Ltd is losing smartphone ground not only to cheaper Chinese rivals but also at the high end to Apple Inc, a survey showed, in an ominous sign for the South Korean giant as Apple readies to launch its next-generation iPhone 6.

Samsung last week gave second-quarter earnings guidance that was far weaker than expectations and is on track for its worst quarterly profit in two years, a performance the company attributed in part to price competition and higher inventory levels in China.

Research firm Counterpoint's survey of 35 markets accounting for nearly 90 percent of global sales found that sales for the eight-month-old iPhone 5s (Review I Pictures) stood at 7 million in May, compared with about 5 million for Samsung's flagship Galaxy S5 (Review I Pictures), which was in just its second full month of sales after a late March release.

Counterpoint said that the Galaxy S5 appeared to be doing worse than the Galaxy S4 (Review I Pictures) had done in its early launch against the iPhone 5, with each selling about 7 million units a month. The data measure retailers' sales to consumers as opposed to typical industry data that look at shipments made by the manufacturer.

Galaxy S5 sales probably remained at about 5 million units in June, said Tom Kang, Seoul-based analyst for Counterpoint. He said the Galaxy S5 fell short of market expectations in terms of display quality and by using a plastic case.

"They made one mistake, one product that didn't hold up to expectations and they are paying the price," he said in a phone interview. "They will have to move forward and leave behind what has failed and focus on the next product."

The data suggests that Samsung's problems run deeper than just the inventory buildup in mid-to-low tier devices that the company reported earlier in the month after disclosing weaker-than-expected second quarter guidance.

Samsung declined to comment on Counterpoint's data or disclose shipment figures for the Galaxy S5, though a Samsung executive in April said that the new flagship device was expected to outperform its predecessor.

"We will strengthen our product competitiveness by reinforcing our premium brand reputation, powerful product line-up, and cutting-edge technology," the company said in an email statement on Wednesday.

Data from research firm Canalys showed that Samsung's market share in the first quarter of 2014 fell to 18 percent from 20 percent a year earlier, while the likes of China's Xiaomi and Lenovo Group Ltd made gains.

Analysts said Samsung's new products such as the S5 did not offer enough to entice consumers to pay a premium over cheaper alternatives that were rapidly improving in quality.

Apple, however, continues to be able to charge premium prices. Its iPhone 6 generation, expected to be launched as soon as September, is anticipated to sport bigger screens which would encroach on what has been a key Samsung advantage.

The Counterpoint data also suggest that Apple's smartphone sales have remained resilient even as anticipation for the new product launch builds. The U.S. company is expected to report its fiscal third-quarter results later this month.

Slowing market
Some slowdown for Samsung was expected following a record year of profits in 2013. Strategy Analytics forecasts global smartphone shipments growth this year to slow to 21 percent from 41 percent in 2013, while faster growth for cheaper smartphones was also expected to undermine margins.

Samsung's worse-than-anticipated operating profit guidance of 7.2 trillion won ($6.96 billion) for the April-June period caught analysts by surprise. Thomson Reuters I/B/E/S survey shows that 28 of 50 analysts polled have cut full-year profit forecasts for the company since the guidance was issued on July 8.

A worker at a South Korean carrier shop in central Seoul said sales of the iPhone 5s and the Galaxy S5 were roughly equal at his store, even though the Apple device had been on the market since October in South Korea.

"iPhone sales have been consistent and the differentiating factor for it is the design," said the worker, who only wanted to be identified by his surname Kim as he was not authorised to speak to the media. "There isn't much difference in the design of a Galaxy phone or an LG phone."

Some analysts said Samsung should bite the bullet and cut prices across the board, trading short-term margins for market share, while others say Samsung should look at more innovative change such as introducing flexible displays.

"The Galaxy brand has been weakened because it's selling $100, $200, $300 phones while Apple only sells $400 and above, so they might even need to throw away their Galaxy brand," he said.